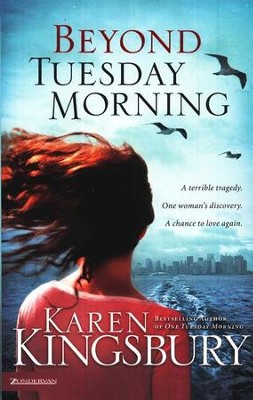 ▼▲
FDNY widow Jamie Bryan volunteers at the Twin Towers memorial chapel. Stunned to meet the brother of Eric Michaels---the man with the uncanny resemblance to Jamie's husband, the man who assumed his identity after 9/11, the man she vowed to never see again---she shuts down. Will reading her dead husband's journal help her move on? 352 pages, softcover from Zondervan.

The hope-filled sequel to the bestselling One Tuesday Morning In this new novel by Karen Kingsbury, three years have passed since the terrorist attacks on New York City. Jamie Bryan, widow of a firefighter who lost his life on that terrible day, has found meaning in her season of loss by volunteering at St. Paul’s, the memorial chapel across the street from where the Twin Towers once stood. Here she meets a daily stream of people touched by the tragedy, including two men with whom she feels a connection. One is a firefighter also changed by the attacks, the other a police officer from Los Angeles. But as Jamie gets to know the police officer, she is stunned to find out that he is the brother of Eric Michaels, the man with the uncanny resemblance to Jamie’s husband, the man who lived with her for three months after September 11. Eric is the man she has vowed never to see again. Certain she could not share even a friendship with his brother, Jamie shuts out the police officer and delves deeper into her work at St. Paul’s. Now it will take the persistence of a tenacious man, the questions from her curious young daughter, and the words from her dead husband’s journal to move Jamie beyond one Tuesday morning. "Jamie Bryan took her position at the far end of the Staten Island Ferry, pressed her body against the railing, eyes on the place where the Twin Towers once stood. She could face it now, every day if she had to. The terrorist attacks had happened, the World Trade Center had collapsed, and the only man she’d ever loved had gone down with them. Late fall was warmer than usual, and the breeze across the water washed over Jamie’s face. If she could do this, if she could make this journey three times a week while Sierra was in school, then she could convince herself to get through another long, dark night. She could face the empty place in the bed beside her, face the longing for the man who had been her best friend, the one she’d fallen for when she was only a girl."

▼▲
'...Kingsbury once again deserves kudos for developing such an intense storyline that will captivate the reader and keep them up in the wee hours of the morning as they wait for their happy ending.' -- The Best Reviews

'...will resonate with her fans. Recommended for public libraries with a demand for this author.' -- Library Journal

▼▲
I'm the author/artist and I want to review Beyond Tuesday Morning, 911 Series #2.
Back
Back