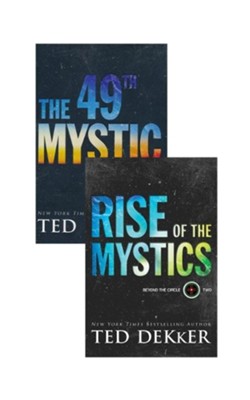 By: Ted Dekker
More in Beyond the Circle Series
Baker Books / Hardcover
Write a Review
In Stock
Stock No: WW729796

Experience the powerful adventure of Ted Dekker's two-part Beyond The Circle series!

The 49th Mystic, #1
The operation to restore a blind girl's sight fails, leading Rachelle to begin dreaming of another world. Now, in both worlds, she learns she is the prophesied one who must recover five ancient seals to save both worlds from falling into darkness forever.

Rise of the Mystics, #2
Some say the great mystery of how one can live in two worlds at once died with Thomas Hunter many years ago. Still others that the gateway to that greater reality was and is only the stuff of dreams. They are all wrong.
Rachelle Matthews, who grew up in the small town of Eden, Utah, discovered just how wrong when she dreamed and awoke in another world. There she learned that she was the 49th Mystic, the prophesied one, tasked with finding five ancient seals before powerful enemies destroy her. If Rachelle succeeds in her quest, peace will reign. If she fails, the world will forever be locked in darkness.

▼▲
I'm the author/artist and I want to review Beyond the Circle, Volumes 1 & 2.
Back