We are OPEN and SHIPPING - click here for shipping estimates
PRE-SUMMER CYBER SALE EXTENDED thru 6/1 ~ Over 2,500 items up to 90% off
Beyond Stereotypes: American Jews and Sports - eBook
By: Ari F. Sclar 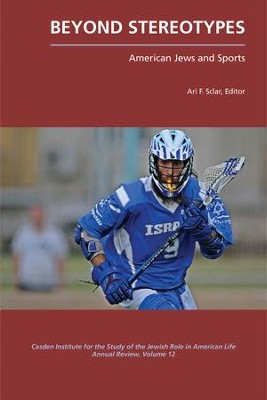 In the decades after the Civil War, sports slowly gained a prominent position within American culture. This development provided Jews with opportunities to participate in one of the few American cultures not closed off to them. Jewish athleticism challenged anti-Semitic depictions of Jews supposed physical inferiority while helping to construct a modern American Jewish identity. An Americanization narrative emerged that connected Jewish athleticism with full acceptance and integration into American society. This acceptance was not without struggle, but Jews succeeded and participated in the American sporting culture as athletes, coaches, owners, and fans.

The diversity of topics in this volume reflect that the field of the history of American Jews and sports is growing and has moved beyond the need to overcome the idea that Jews are simply People of the Book. The contributions to this volume paint a broad picture of Jewish participation in sports, with essays written by respected historians who have examined specific sports, individuals, leagues, cities, and the impact of sport on Judaism. Despite the continued belief that Jewish religious or cultural identity remains somehow distinct from the American idea of the athlete, the volume demonstrates that American Jews have had a tremendous contribution to American sportsand conversely, that sports have helped construct American Jewish culture and identity.

Ari F. Sclar teaches at the Ramaz Upper School in New York City and is an adjunct professor in the History Department at Hunter College. He has a doctoral degree in American History from Stony Brook University and his dissertation examined basketballs impact on American Jewish culture and identity in the first half of the twentieth century. He previously served as the Director of Content of the Jews in Sports Online web site, first at New York University and then at the American Jewish Historical Society.

▼▲
I'm the author/artist and I want to review Beyond Stereotypes: American Jews and Sports - eBook.
Back
×
Back
×