Skip to main content
SPRING CYBER EVENT STARTS NOW: And it's a really BIG deal! Up to 88% off through 5/24>
Beyond the Qumran Community: The Sectarian Movement of the Dead Sea Scrolls
By: John J. Collins
Stock No: WW828873 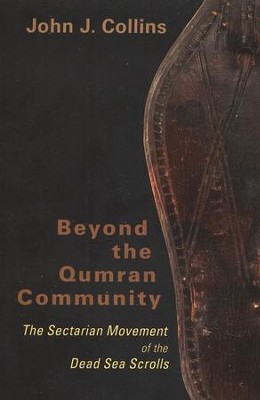 Beyond the Qumran Community: The Sectarian Movement of the Dead Sea Scrolls

▼▲
It is beyond doubt that the study of the Dead Sea Scrolls has entered a new era. While some scholars are still focused on the texts themselves, many have begun to examine what the texts say, and still others have begun to examine what those texts and other physical evidence can tell us about the nature of what we now call, perhaps misleadingly, "the Qumran Community."

It is clear; the study of the Dead Sea Scrolls is a discipline yet to reach its nadir.In Beyond the Qumran Community: The Sectarian Movement of the Dead Sea Scrolls John Collins argues "that the sectarian movement known from the [Dead Sea] Scrolls cannot be identified simply as "the Qumran community." Collins believes that the evidence suggest (demands?) that we understand Qumran as one among many settlements, of the sect that populated rural areas, as well as towns and that they always formed communities (Collins, 10-11).

To demonstrate his argument, Collins appeals to the DSS themselves, especially 1QS, or the Community Rule (A.K.A. Manuel of Discipline or serek ha-yahad). Yet, Collins also uses the a non-Qumran text, that is related 1QS in both content and purpose. Like 1QS, Cairo Damascus first published in the early 20th Century, is a 'community rule' whose beginning and ending overlap with that of 1QS, but who differs from 1QS in terminology (especially in terms of "community" CD uses 'elah and 1QS yahad), the allowance for women and children (CD is positive and 1QS does not mention them), differing levels of complexitity for community admission, and different attitudes to the temple (Collins, 12-87).

But Collins does not limit his thesis to the DSS text, he also incorporates the historical setting of the Essenes and looks to their widespread and at times problematic political relationships, and to citations of ancient authorities such as Philo and Josephus to fill in the bigger picture of the myriad presence of the Essenes in Israel during the Graeco-Roman era. But it is no truncated treatment of ancient authorities. Collins suggests that these sources, external to the Essenes must be governed by sound historiography and only then appropriated into our understanding of the "Qumran community." This book is an excellent read that sheds much light on an increasingly complex field of scholarship that is still in its beginning stages. This book is a must read for all students and scholars interested in the DSS.

▼▲
With the full publication of the Dead Sea Scrolls, fresh analysis of the evidence presented can be — and indeed, should be — made. Beyond the Qumran Community does just that, reaching a surprising conclusion: the sect described in the Dead Sea Scrolls developed later than has usually been supposed and was never confi ned to the site of Qumran. / John J. Collins here deconstructs “the Qumran community” and shows that the sectarian documents actually come from a text spread throughout the land. He examines the Community Rule, or Yahad, and considers the Teacher of Righteousness, a pivotal fi gure in the Essene movement. After examining the available evidence, Collins concludes that it is, in fact, overwhelmingly likely that the site of Qumran housed merely a single settlement of a very widespread movement.

▼▲
I'm the author/artist and I want to review Beyond the Qumran Community: The Sectarian Movement of the Dead Sea Scrolls.
Back
Back