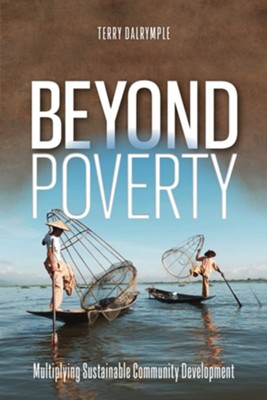 ▼▲
The church is facing a strategic opportunity -- 85 percent of people living in extreme poverty around the world reside in villages.These villages are also home to the majority of the world’s least reached people. The church has historically played an active role in wholistic ministry and alleviating global poverty with a goal of encouraging sustainable community?development. However, while these outreaches may succeed in "helping without hurting," they still often focus on limited-scope projects that provide good solutions to a single community.

In "Beyond Poverty," Terry Dalrymple calls us to move beyond sustainable projects in a single village to transformational movements that multiply change from village to village and sweep the countryside. Through multiple case studies based on the actual experiences of more than 900 organizations in 135 different countries, this book tells the story of a large and growing network of ministries around the world using the strategy of Community Health Evangelism to change the life of the poor forever. The principles in this book are not just a theory, but proven strategy.


The church is uniquely positioned to accelerate poverty alleviation worldwide. This book will help you understand the fundamentals of catalyzing transformational movements that make disciples among the poor while lifting whole communities out of cycles of poverty and disease. This is our moment! This is your opportunity to advance a global movement and answer the cry of the poor in a million villages.

▼▲
For more than two decades, Terry Dalrymple has championed the cause of the poorest of the poor. He has trained and mobilized workers around the world to initiate transformational ministries in villages and slums—ministries which make disciples, plant churches, and lift families and communities out of cycles of poverty and disease.

Terry’s strategy, Community Health Evangelism (CHE), is currently being used by Christian ministries and denominations in 136 countries. Through his global network, he is guiding the expansion of a growing movement aimed at establishing wholistic ministries in a million villages and bringing the truth and transforming power of the gospel to the people who make their homes there.

Terry was the founder, and is now the coordinator, of the Global CHE Network (www.chenetwork.org). He was a cofounder, and is now the vice president, of the Alliance for Transformational Ministry. In addition, he serves as a catalyst for Transform World’s Poverty Challenge and as an instructor at the Geneva Institute for Leadership and Public Policy at the United Nations.

▼▲
"Terry Dalrymple has lived and worked in two worlds of mission. His first career focused on missionaries planting local churches that attracted individuals to Jesus while still respecting the surrounding culture. In his second career, he learned about Community Health Evangelism (CHE) and its focus both on church planting movements and on poverty alleviation.

Dalrymple’s conclusion is "If we view our mission as projects to finish, rather than movements to start, we have lost sight of something fundamental in our calling." He sees CHE as a tool God has uniquely designed to ease the world’s poverty. CHE prioritizes local ownership that makes development sustainable and multipliable. Dalrymple shows that CHE works not solely because of reasonable thinking, but because of intangible elements that the Holy Spirit brings to communities as they work together: dignity, hope, vision, and unity.

This book marvelously synthesizes ideas that are counter-intuitive to many minds in North America and Europe. However, what makes it fun to read are its well-told stories. I think many people will find this book powerfully inspiring."

"The worldwide CHE movement is one of the formidable tools God is using today to usher in His Kingdom on earth. Beyond Poverty is the movement’s best articulation to date. Terry Dalrymple has hammered out a compelling apologetic on the anvil of Biblical truth. The book is eloquent, well researched, validated with field experience and invitingly readable."

"In Beyond Poverty, Terry Dalrymple presents the challenge of moving Christian servants of God beyond sustainable development work in a single village to transformational movements that sweep the countryside, based on the strategy of Community Health Evangelism (CHE), a global network which Terry founded and now serves as coordinator. I have come to know and appreciate Terry as a co-catalyst for Transform World’s Poverty Challenge, which focuses on transforming communities among the unreached and unengaged people who live in the 10/40 Window. Terry envisions the Million Village Challenge--which is strategically based on clusters, models, and tipping points—as a bold mission initiative that has the goal of reaching one million mission villages where the remaining unreached people groups and the poorest of the poor live."

"Beyond Poverty could well be one of the most influential books for this century, as it is a catalytic spark for global awareness of the gathering wave to fulfill the Great Commission of our Lord. The Joshua Project clearly stated several years ago that the remaining unreached tribes are poor and rural. May God open your mind, eyes, and heart through his amazing work!!"

"In Beyond Poverty, Terry has beautifully laid out the Biblical basis for wholistic ministry and foundational principles for transformational movements. The inspiring stories of movements that he shares have been catalyzed by ordinary people with an extraordinary passion to be obedient to the cause of Christ. The book is easy to read, very informational, and hopefully the reader will be inspired to become a part of this movement that will ultimately bring new life to a million villages."

"Beyond Poverty gives a blueprint for a true integral missional approach that leads to sustainable community--and church owned development. Terry Dalrymple convincingly demonstrates through practical examples that this outcome is the result of an unconditional commitment to follow Jesus and to seamlessly integrate evangelism and compassion with an intentional focus on working collaboratively within the body of Christ. This book can become a new standard reference for Christian professionals in the global development arena. Terry’s deep experience as practitioner and master trainer in gospel-driven community development enriches the work throughout. This is a must-read for anyone with a serious interest in the growing role of development in the changing missiological landscape."

"I am so honored to endorse Terry Dalrymple’s book. Terry introduced me to wholistic mission work years ago and mentored me through the transition from an evangelistic relief model of our church to a wholistic evangelism model. It has been several years now and I cannot even begin to tell you the transformational impact his teaching has had on our global missions work and our church. And now it’s documented in his book. This book captures a lifetime of one man’s obedience to God as he presents what he has learned. Beyond Poverty is a playbook for those of us who desire to restore dignity and honor to those who are struggling and giving them hope. Truly a masterpiece!"

"Even among the mass of global volunteerism in our world today, there is still a need for leaders—even more so, generals. They must see beyond the obvious, into the seemingly unknown realms, lay hold of vision, and then cast that vision to the masses in order for great things to be moved from the realms of impossibilities to the daily realities of changed lives. My friend, my colaborer and mentor, Terry Dalrymple, is such a general. For decades, and in this soul-challenging book, with its scriptural principles and proven practices, he seeks to inspire and call to arms every true believer in Christ to engage wholeheartedly in obeying the singular mission commandment to "make disciples," while alleviating wholistic poverty for untold numbers of the world’s poor. Be ready to learn and to join the movement of transformation that is already shaking the globe!"

▼▲
I'm the author/artist and I want to review Beyond Poverty: Multiplying Sustainable Community Development.
Back