Skip to main content
SPRING CYBER EVENT STARTS NOW: And it's a really BIG deal! Up to 88% off through 5/24>
Beyond Numeracy - eBook
By: John Allen Paulos
Stock No: WW40557EB 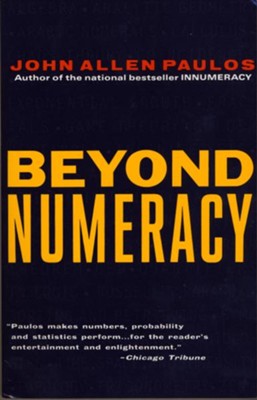 ▼▲
From the author of the national bestseller Innumeracy, a delightful exploration and explanation of mathematical concepts from algebra to zero in easily accessible alphabetical entries. "Paulos . . . does for mathematics what The Joy of Sex did for the boudoir. . . ."--Washington Post Book World. First time in paperback.

▼▲
John Allen Paulos is an acclaimed author, popular public speaker, and former monthly columnist for ABCNews.com, the Scientific American, and the Guardian (London). A professor of math at Temple University in Philadelphia, he earned his PhD in the subject from the University of Wisconsin. His books include A Numerate Life, the New York Timess–bestselling Innumeracy, and A Mathematician Reads the Newspaper. In 2003 he received the American Association for the Advancement of Science award for promoting public understanding of science, and in 2013 the Mathematics Communication Award from the Joint Policy Board for Mathematics.

▼▲
I'm the author/artist and I want to review Beyond Numeracy - eBook.
Back
Back