We are OPEN and SHIPPING - click here for shipping estimates
PRE-SUMMER CYBER SALE: Shop over 2,500 items up to 90% off through 5/26 >
Beyond Nature's Housekeepers: American Women in Environmental History
By: Nancy C. Unger 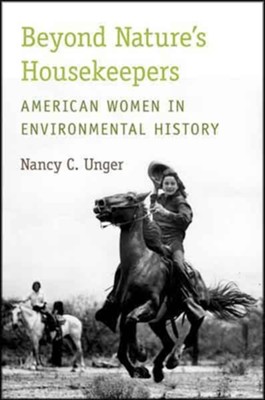 ▼▲
From pre-Columbian times to the environmental justice movements of the present, women and men frequently responded to the environment and environmental issues in profoundly different ways. Although both environmental history and women's history are flourishing fields, explorations of the synergy produced by the interplay between environment and sex, sexuality, and gender are just beginning. Offering more than biographies of great women in environmental history, Beyond Nature's Housekeepers examines the intersections that shaped women's unique environmental concerns and activism and that framed the way the larger culture responded. Women featured include Native Americans, colonists, enslaved field workers, pioneers, homemakers, municipal housekeepers, immigrants, hunters, nature writers, soil conservationists, scientists, migrant laborers, nuclear protestors, and environmental justice activists. As women, they fared, thought, and acted in ways complicated by social, political, and economic norms, as well as issues of sexuality and childbearing. Nancy C. Unger reveals how women have played a unique role, for better and sometimes for worse, in the shaping of the American environment.

▼▲
Nancy C. Unger is Professor of History at Santa Clara University. She is the author of the prize-winning biography Fighting Bob La Follette: The Righteous Reformer, and book review editor of The Journal of the Gilded Age and Progressive Era.

▼▲
"Provides a useful survey of the ways that environmental history and women's history can come together. Between the early discussions of women's labour and land use, to discussions of how constructions of gender have been informed by the association between femininity and nature, to women's role in environmental movements, Unger provides a number of different directions for readers to follow up."--Women's History
"Nancy Unger's Beyond Nature's Housekeepers: American Women in Environmental History chronicles women's interactions with nonhuman nature throughout American history. It is an ambitious and important work that combines American environmental and women's and gender history into an accessible synthesis that would be useful not only in women's and environmental history survey courses, but also in both halves of the US history survey. Unger's book would also appeal to readers with a general interest in American women's or environmental history....Unger weaves together a highly engaging narrative of women's and environmental history that incorporates a multitude of fresh voices into the master narrative of American history."--Peggy Macdonald, Environmental History
"In Beyond Nature's Housekeepers, Nancy Unger brings together a breadth of scholarship that touches on American women's experience and impact on the environment in a short, well-written book. The relatively brief chapters with vivid anecdotes are perfect for an undergraduate audience."--Pacific Historical Review
"With this book, Unger has undertaken a formidable task that could have failed in the hands of a less-accomplished historian. She persuasively demonstrates that there is a distinct women-centered understanding of environmentalism and the people's relationship to the environment that transcends time and place and that this perspective must be incorporated into any analysis of environmental history."--American Historical Review
"Unger's narrative is a go-to reference for anyone interested in the socially constructed and physical ways both sex and gender intersect with nature in the United States. It is an important work that will be a reference in the field for quite some time."--Environment and History
"In this rich, learned, and lively synthesis, Nancy C. Unger reveals the astoundingly varied, crucial roles women have played throughout American environmental history. Where we have heretofore seen glimpses and snippets of this immense and still evolving story, Unger gives us a sweeping narrative to savor and ponder. A marvelous achievement!"--Virginia Scharff, University of New Mexico and Autry National Center

"In the United States sex, sexuality, and gender have mattered in the way that women's concerns and activism in regard to environmental issues have been framed and received by the larger culture. Beyond Nature's Housekeepers provides a comprehensive overview of the subject."--Vera Norwood, author of Made From This Earth: American Women and Nature

▼▲
I'm the author/artist and I want to review Beyond Nature's Housekeepers: American Women in Environmental History.
Back
×