Skip to main content
Beyond the Modern Age: An Archaeology of Contemporary Culture
By: Bob Goudzwaard, Craig G. Bartholomew
Stock No: WW851515 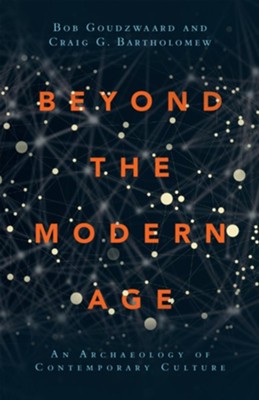 Beyond the Modern Age: An Archaeology of Contemporary Culture

The modern age has produced global crises that modernity itself seems incapable of resolving—deregulated capitalism, consumerism, economic inequality, militarization, overworked laborers, environmental destruction, and many others. In Beyond the Modern Age Bob Goudzwaard and Craig G. Bartholomew conduct an archaeological investigation and critique of four modern worldviews to demonstrated the need for renewed ways of thinking and living that overcome the relentless drive of progress. In grand vision charged with profound insight, they engage us in an honest, interdisciplinary, and global dialogue, always pointing the way forward, beyond the modern age.

The modern age has produced global crises that modernity itself seems incapable of resolving—deregulated capitalism, consumerism, economic inequality, militarization, overworked laborers, environmental destruction, insufficient health care, and many other problems. The future of our world depends on moving beyond the modern age. Bob Goudzwaard and Craig G. Bartholomew have spent decades listening to their students and reflecting on modern thought and society. In Beyond the Modern Age they explore the complexities and challenges of our time. Modernity is not one thing but many, encompassing multiple worldviews that contain both the source of our problems and the potential resources for transcending our present situation. Through an archaeological investigation and critique of four modern worldviews, Goudzwaard and Bartholomew demonstrate the need for new ways of thinking and living that overcome the relentless drive of progress. They find guidance in the work of René Girard on desire, Abraham Kuyper on pluralism and poverty, and Philip Rieff on culture and religion. These and other thinkers point the way toward a solution to the crises that confront the world today. Beyond the Modern Age is a work of grand vision and profound insight. Goudzwaard and Bartholomew do not settle for simplistic analysis and easy answers but press for nuanced engagement with the ideologies and worldviews that shape the modern age. The problems we face today require an honest, interdisciplinary, and global dialogue. Beyond the Modern Age invites us to the table and points the way forward.

Bob Goudzwaard is professor emeritus of economics and social philosophy at the Free University in Amsterdam. He is the author of numerous books including Capitalism and Progress and Hope in Troubled Times. Goudzwaard was elected to the Dutch parliament in the 1970s and served for a time in a Christian policy research institute in The Hague. Both within and outside of his extensive political career, he has been deeply involved in international development issues, including chairing a two-year consultation between the World Council of Churches, the International Monetary Fund, and the World Bank.

Craig G. Bartholomew is H. Evan Runner Professor of Philosophy and professor of religion at Redeemer University College in Ancaster, Ontario. He is dean of the St Georges Centre for Biblical and Public Theology as well as adjunct faculty at Trinity College, Bristol. He has written and edited numerous books, including Contours of the Kuyperian Tradition, Introducing Biblical Hermeneutics, Beyond the Modern Age (with Bob Goudzwaard), The Drama of Scripture (with Michael Goheen), and a commentary on Ecclesiastes. He initiated and directed the Scripture and Hermeneutics Seminar, which now continues as part of the St Georges Centre.

" Beyond the Modern Age stands as a testament to the ongoing vitality of the Kuyperian tradition, from which other streams stand to be enriched."

▼▲
I'm the author/artist and I want to review Beyond the Modern Age: An Archaeology of Contemporary Culture.
Back
Back