Skip to main content
Beyond Maintenance to Mission: A Theology of the Congregation
By: Craig Nessan
Stock No: WW663261 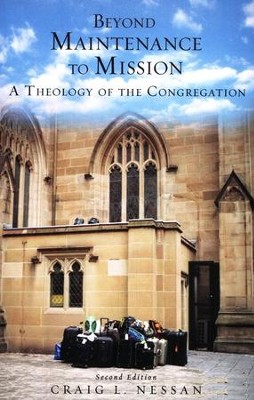 Beyond Maintenance to Mission: A Theology of the Congregation

▼▲
"Each of Nessan's chapters is, in many ways, a gem. Ought to be read by all seminarians and by all who lead in congregations,"---Word and World. Fleshes out kerygma, koinonia, and diakonia in a modern setting as practiced in worship, education, fellowship, stewardship, evangelism, global connections, and social ministry. 192 pages, softcover.

Here, in a newly revised edition, is a powerful and pertinent guide for congregations wanting to move away from 'maintenance thinking' to powerful, creative engagement with the world.

Visionary yet practical, Nessan's influential book makes a persuasive case for the centrality of mission in the life of the church. Nessan's model of mission-driven leadership is strongly centered on the community of faith's worship and draws unique connections between the worship life of a congregation and every aspect of the church's ministry. Around the twin foci of congregational identity and mission, the chapters in this dynamic book provide solid theological and radical direction on the themes of worship, education, fellowship, stewardship, evangelism, global connections, and social ministry.

Equally pertinent to seminary classroom and parish life, the new edition highlights worship's centrality, adds a new chapter on prayer and spiritual practices in this framework, significantly revises the treatments of fellowship and evangelism, and adds a full set of materials designed for congregational visioning and planning.

Craig L. Nessan was born on June 9, 1952 in Lansing, Michigan, U.S.A. He is the son of Lee A. Nessan of Bella Vista, Arkansas and Lucy E. Nessan, both deceased.

Craig attended elementary school, junior high school and high school in Lansing, Michigan, graduating from Lansing Everett High School in June 1970. From 1970 until 1974 he studied at Michigan State University in East Lansing, Michigan. He received his Bachelor of Arts degree magna cum laude in June 1974, majoring in psychology. In the fall of 1974 he began his theological studies at Wartburg Theological Seminary in Dubuque, Iowa. Having served a pastoral internship in Minneapolis, Minnesota, he graduated from Wartburg Theological Seminary in May 1978 and received the degree Master of Divinity. In December 1978 he received the degree Master of Sacred Theology from Wartburg Theological Seminary. His thesis was entitled Heidegger, Language, and Biblical Interpretation and was received with distinction.

Accepting a position as Academic Assistant to Prof. Dr. Hans Schwarz at the University of Regensburg, Germany, Craig worked in this position from November 1982 until September 1986. He taught courses at the universities in Regensburg and Passau. During these years he also researched and wrote his doctoral dissertation, published in the United States as Orthopraxis or Heresy: The North American Theological Response to Latin American Liberation Theology. He earned the degree Doctor of Theology from the University of Munich in the summer of 1986.

From January 1987 to January 1994, Craig served as pastor of St. Mark Lutheran Church in Cape Girardeau, Missouri, a congregation of the Evangelical Lutheran Church in America. During these years the St. Mark congregation worked to construct a new sanctuary and education building. From August 1989 to December 1993, he also taught in the Philosophy and Religion Department at Southeast Missouri State University in Cape Girardeau, specializing in World Religions and Science and Religion.

In January 1994, Craig returned to Dubuque, Iowa to accept the call to serve at Wartburg Theological Seminary. As Associate Professor of Contextual Theology, his responsibilities include oversight of the internship program, coordination of Clinical Pastoral Education, and teaching in the areas of theology, ministry and ethics. In July 1999 he was appointed Academic Dean of the seminary. He is the author of Many Members, Yet One Body: Committed Same-Gender Relationships and the Mission of the Church, Give Us This Day: A Lutheran Proposal for Ending World Hunger, The Air I Breathe is Wartburg Air: The Legacy of William H. Weiblen, Beyond Maintenance to Mission: A Theology of the Congregation, Who is Christ for Us? (introduced, translated, and edited with Renate Wind), Orthopraxis or Heresy: The North American Response to Latin American Liberation Theology, and numerous articles and book reviews.

▼▲
I'm the author/artist and I want to review Beyond Maintenance to Mission: A Theology of the Congregation.
Back
Back