We are OPEN and SHIPPING - click here for shipping estimates
PRE-SUMMER CYBER SALE EXTENDED thru 6/1 ~ Over 2,500 items up to 90% off
Beyond Liberalism and Fundamentalism
Edited By: Werner H. Kelber, Wilhelm Kelber
By: Nancey Murphy 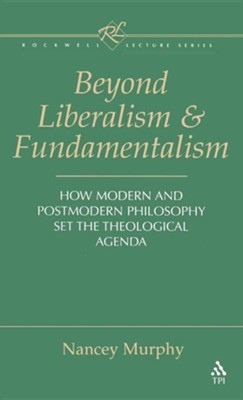 Beyond Liberalism and Fundamentalism

▼▲
American Protestant Christianity is often described as a two-party system divided into liberals and conservatives. This book clarifies differences between the intellectual positions of these two groups by advancing the thesis that the philosophy of the modern period is largely responsible for the polarity of Protestant Christian thought. A second thesis is that the modern philosophical positions driving the division between liberals and conservatives have themselves been called into question. It therefore becomes opportune to ask how theology ought to be done in a postmodern era, and to envision a rapprochement between theologians of the left and right. A concluding chapter speculates specifically on the era now dawning and the likelihood that the compulsion to separate the spectrum into two distinct camps will be precluded by the coexistence of a wide range of theological positions from left to right. Nancey C. Murphy is Associate Professor of Christian Philosophy at Fuller Theological Seminary, Pasadena, and the author of Reasoning and Rhetoric in Religion, also published by Trinity Press. Her book Theology in the Age of Scientific Reasoning earned the American Academy of Religion's Award for Excellence.

▼▲
I'm the author/artist and I want to review Beyond Liberalism and Fundamentalism.
Back
×