Skip to main content
Beyond the Final Score: There's More to Life Than the Game - eBook
By: Tom Osborne
Stock No: WW67035EB 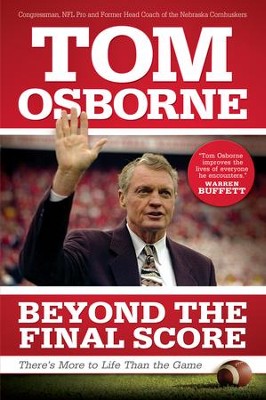 Beyond the Final Score: There's More to Life Than the Game - eBook

▼▲
From the vast farmlands of Nebraska to the halls of Congress to the Green Zone in Iraq, Tom Osborne has become a legend by serving those around him and by always putting his God first. Perhaps no college football program in history has seen as much success as Osborne's did under his watch (255 wins in 25 seasons). But there is much more to Tom Osborne. Beyond the Final Score chronicles his years as a congressman, educator, family man, mentor, and now athletic director. It reveals the character, values, and faith that have grounded him throughout his incredible journey. Like a good memoir, Beyond the Final Score goes right to the heart of a true American legend. It takes the reader on a walk trough surprising moments (such as the day he began training Iraqi women on how to change their nation), profound insights (there is more prayer in Washington than one might think), and many less-than-serious moments (such as the day he thought he was going to teach his wife how to fish). A rare book in which an American legend brings wisdom, sensibility, dignity, and spirituality to culture, worldview, politics, leadership, and what really matters in everyday life.

▼▲
TOM OSBORNE was the head coach of the University of Nebraska Cornhuskers football team for 25 years. He was named "coach of decade" by ESPN in 1999 and in 2007 was voted "greatest college football coach of all time" in an online ESPN poll. He was inducted into the College Football Hall of Fame in 1999 and is the recipient of the Jim Thorpe Lifetime Achievement Award and the Tuss McLaughry Award for distinction in service to others. Tom was elected to the U.S. House of Representatives in 2000 and served in Congress for six years. He is now the athletic director at the University of Nebraska.

▼▲
I'm the author/artist and I want to review Beyond the Final Score: There's More to Life Than the Game - eBook.
Back
Back