Skip to main content
Beyond Pius V: Conflicting Interpretations of the Liturgical Reform - eBook
By: Andrea Grillo
Stock No: WW62407EB 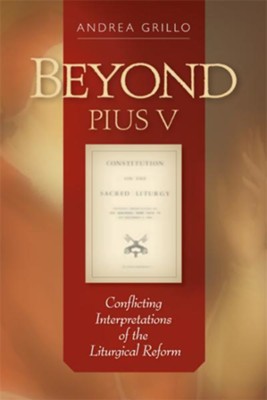 Beyond Pius V: Conflicting Interpretations of the Liturgical Reform - eBook

The reform of the liturgy is at risk, says Andrea Grillo. Recent developments have sown doubts and confusion within the church. While many authorities pay lip service to the importance of the liturgical reform that followed Vatican II and cite all the right documents, what they offer is out of tune with the fundamental reasons for the reform.

Grillo argues that the church today must refresh its collective memory of the essential meaning of the liturgical reform. For Grillo, this means understanding

Beyond Pius V is not simply a set of pastoral observations. It is a strongly argued theological essay on the true meaning and purpose of liturgy and liturgical reform. That reform, Grillo says, must continue to challenge and provoke us, never to be reduced to the precious past of our ancestors; rather, like children who honor the legacy of their parents, we are called to carry on and nurture the life of the reform.

▼▲
I'm the author/artist and I want to review Beyond Pius V: Conflicting Interpretations of the Liturgical Reform - eBook.
Back
Back