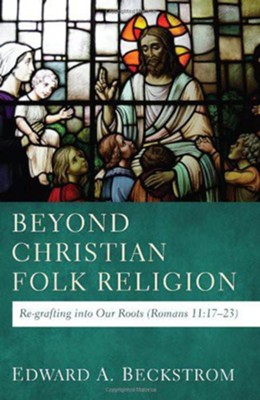 Beyond Christian Folk Religion: Re-grafting into Our Roots (Romans 11:17-23) - eBook

▼▲
As the Christian church moved from its inception in an Eastern/Oriental culture westward across Asia Minor (Turkey) into Greco-Roman culture with primarily a Western philosophy, theology, and values, Jesus' message and Paul's teachings began to be interpreted according to those cultural norms. While Paul kept calling his churches back to their Jewish roots and Eastern values, the Jewish voice was lost when the Jerusalem church dispersed as Israel fell during the Jewish Revolt of 66-73 AD. The temple was destroyed, its clergy silenced, and Judaism seemed irrelevant to the growing Christian church. The church had become primarily Gentile in theology and philosophy and its Hebrew foundation was largely forgotten and lost. In Beyond Christian Folk Religion, Beckstrom, brings the reader back to Jesus' roots (Romans 11:17-23) and to the core of Paul's message.

▼▲
Edward A. Beckstrom is a retired minister and Air Force Chaplain. He is the author of Toward a Ministry of Families (1981) and King of the Jews: Jesus and the Messianic Age (2001). He has also authored numerous articles for the Pulpit Digest, Minister's Annual, and most recently the Biblical Theology Bulletin (2012).

▼▲
I'm the author/artist and I want to review Beyond Christian Folk Religion: Re-grafting into Our Roots (Romans 11:17-23) - eBook.
Back
Back