Skip to main content
SPRING CYBER EVENT STARTS NOW: And it's a really BIG deal! Up to 88% off through 5/24>
Beyond Championships: A Playbook for Winning at Life - eBook
By: Dru Joyce II, LeBron James, Chris Morrow
Stock No: WW66340EB 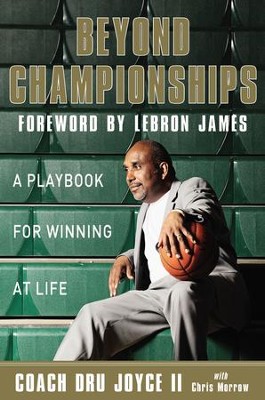 Beyond Championships: A Playbook for Winning at Life - eBook

As the coach of one of high school basketball’s greatest programs, Coach Dru Joyce has been mentor and motivator to some of the nation’s best young players, including basketball legend LeBron James. Despite having virtually no experience in the sport, in less than ten years Dru went from a no-name fan to one of the highest profile basketball coaches in the country.

With insight and grit earned from his years on and off the court, Coach Dru shares for the first time the secrets to his teams’ success and his own coaching achievements. Far more than a sports book, Beyond Championships is a blueprint for anyone looking to make better choices, reach their full potential, and become winners in all areas of life.

As Dru outlines the nine principles that he promotes to his players and tries to live in his own life as well, you’ll discover that the solid foundation on which he built so many successful basketball programs can be applied to almost any situation. As you assess your chosen path in life and look for ways to embark on a more inspiring and rewarding journey, Coach Dru offers an accessible and relatable roadmap for personal evolution.

Dru Joyce II was born and raised in East Liverpool, Ohio. He is a graduate of East Liverpool High School and Ohio University, with a degree in Business Administration. Dru moved his family to Akron in 1984 for his position at Con Agra. In 2004 Dru left Con Agra after twenty-six years to coach basketball full-time. Dru and his wife Carolyn are parents of four and grandparents of four. For more information about Coach Dru check out www.neobasketball.com.

▼▲
I'm the author/artist and I want to review Beyond Championships: A Playbook for Winning at Life - eBook.
Back
Back