Skip to main content
Faith Beyond Borders: Doing Justice in a Dangerous World
By: Donald Mosley
Stock No: WW707896 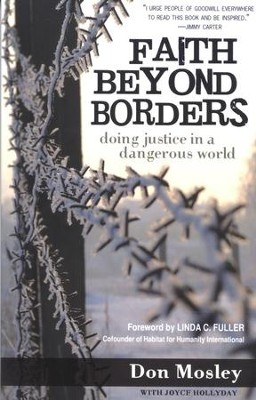 Faith Beyond Borders: Doing Justice in a Dangerous World

▼▲
For more than thirty years, Don Mosley has traveled the globe, working for the cause of justice on behalf of two organizations he helped to found: Habitat for Humanity and Jubilee Partners, a community of believers who have welcomed 3,000 refugees from danger zones around the world.

In this book, he uses stories from his remarkable walk of faith to issue an action call for Christians to live out the teachings of Jesus, no matter where they take us or what they require us to do.

▼▲
Don Mosley has been an active Christian peacemaker in countries around the world for many years. After serving in the Peace Corps, he and his wife Carolyn moved to Koinonia Partners in Georgia in 1970. He helped to launch Habitat for Humanity in 1976 and Jubilee Partners in 1979, whose staff has worked with more than 3,000 refugees from crises all over the world. In dozens of trips to war zones he has seen the power of God s love to restore peace between former enemies. He lives in Comer, Georgia. Joyce Hollyday is a co-founder and co-pastor of Circle of Mercy, an ecumenical congregation in Asheville, North Carolina. She served for fifteen years as the Associate Editor of Sojourners magazine and is the author of several books, including Clothed with the Sun: Biblical Women, Social Justice, and Us and Then Shall Your Light Rise: Spiritual Formation and Social Witness.

▼▲
I'm the author/artist and I want to review Faith Beyond Borders: Doing Justice in a Dangerous World.
Back
Back