Skip to main content
Beyond Belief: Finding the Strength to Come Back
By: Josh Hamilton
Stock No: WW951607 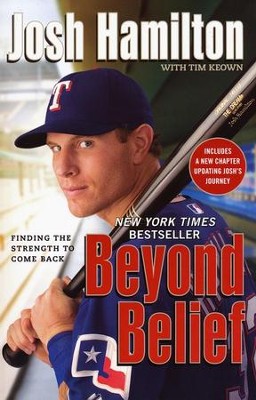 Beyond Belief: Finding the Strength to Come Back

▼▲
In 1999, Josh Hamilton was on the verge of phenomenal success. He had been signed by the Tampa Bay Devil Rays and was offered a $3.96 million signing bonus at the age of eighteen. However in 2001, following a major car accident, he began experimenting with drugs. From that time on, addiction overtook his life and he fell into a downward spiral of drug and alcohol use that lasted for four years, and resulted in his suspension from baseball.

But that wasn't the end of the story for Josh. In October of 2005 he hit rock bottom and called out to God for help. With God's grace, and an intervention of tough love from his grandmother, Hamilton has been sober since 2005. He worked his way back into Major League Baseball, and has played for the Texas Rangers since 2008. This paperback edition of Beyond Belief has been revised to include recent updates on Josh's recovery. Read this compelling story of redemption and see for yourself God's power to save.

▼▲
Josh Hamilton was the first player chosen in the first round of the 1999 baseball draft. He was destined to be one of those rare "high-character " superstars. But in 2001, working his way from the minors to the majors, all of the plans for Josh went off the rails in a moment of weakness. What followed was a 4-year nightmare of drugs and alcohol, estrangement from friends and family, and his eventual suspension from baseball.

BEYOND BELIEF details the events that led up to the derailment. Josh explains how a young man destined for fame and wealth could allow his life to be taken over by drugs and alcohol. But it is also the memoir of a spiritual journey that breaks through pain and heartbreak and leads to the spectacular rebirth of his major-league career.

Josh Hamilton makes no excuses and places no blame on anyone other than himself. He takes responsibility for his poor decisions and believes his story can help millions who battle the same demons. "I have been given a platform to tell my story" he says. "I pray every night I am a good messenger." Also, as part of the paperback edition of BEYOND BELIEF, Josh's journey has been updated to include developments in his recovery.

▼▲
Josh Hamilton is an outfielder with the Los Angeles Angels and perennial Major League Baseball All-Star. Drafted by the Tampa Bay Rays in 1999, he made his Major League debut with the Cincinnati Reds who then traded him to the Texas Rangers where he played for 5 seasons including trips to the World Series in 2010 and 2011. He is a five-time MLB All-Star and won the AL Most Valuable Player Award (MVP) in 2010. In the offseason he lives in Texas with his wife Katie and their four daughters.

▼▲
I'm the author/artist and I want to review Beyond Belief: Finding the Strength to Come Back.
Back
Back