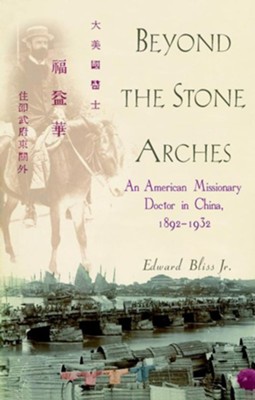 Beyond the Stone Arches: An American Missionary Doctor in China, 1892-1932

▼▲
In this inspired and riveting read, distinguished journalist Edward Bliss Jr. - the son of this original Peace Corpsman - tells the remarkable story of a courageous pioneer who selflessly risked his life to serve others. With the refreshing intimacy of a memoir and based in large part on letters Bliss wrote home, this book takes us back to the nineteenth and early twentieth centuries, which saw an outpouring of missionaries to Asia, Africa, and the Middle East.

▼▲
Advance Praise for Beyond the Stone Arches
""Now the world can share the life of this great man. In its intimate detail, this is a fascinating story that serves as a valuable introduction to the people of a country so important to us today.""-Walter Cronkite
""A fascinating look at China from the point of view of an American medical missionary, this absorbing life of a quiet hero rings with authenticity and sheds light on the turbulent years from the late 1800s to 1932 that will be a revelation for most Western readers.""-Adeline Yen Mah, author of Falling Leaves
""This is a proud man's story of a father who lived a life of a medical missionary in China for forty years-a life of service, sacrifice, joy, and fulfillment. The pages turn easily and quickly with humor, care, and love. It's a jewel of a book that will remain with you forever.""-Jim Lehrer, The News Hour
""A small gem. Edward Bliss embarked, against great odds, on a remarkable range of activities aimed at improving the livelihood of common people. He was a veritable one-man Peace Corps. His is an inspiring story that warms the heart and enriches the soul.""-H. T. Huang, author of Science and Civilization in China
""It took three years for Edward Bliss, M.D., to ascend the Min River in a convoy of three river junks in 1893, averaging fourteen miles a day. This was his first trip to Shaowu, which became his home for forty-two years, a tumultuous and dangerous time and place. His son tells the story of his father's life and work in fascinating detail, drawing on a trove of letters and extensive interviews with his father.""-Donald MacInnis, former Methodist missionary and China Program Director, National Council of Churches/USA

▼▲
I'm the author/artist and I want to review Beyond the Stone Arches: An American Missionary Doctor in China, 1892-1932.
Back