Beyond All Measure, Hickory Ridge Series #1
By: Dorothy Love
Stock No: WW549006 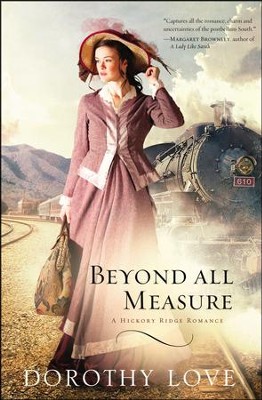 Beyond All Measure, Hickory Ridge Series #1

▼▲
Ada Wentworth, a young Bostonian, journeys to Hickory Ridge, Tennessee, in the years following the Civil War. Alone and nearly penniless following a broken engagement, Ada accepts a position as a lady's companion to the elderly Lillian Willis, a pillar of the community and aunt to the local lumber mill owner, Wyatt Caldwell. Ada intends to use her millinery skills to establish a hat shop and secure her future.

Haunted by unanswered questions from her life in Boston, Ada is most drawn to two townsfolks: Wyatt, a Texan with big plans of his own, and Sophie, a mulatto girl who resides at the Hickory Ridge orphanage. Ada's friendship with Sophia attracts the attention of a group of locals seeking to displace the residents of Two Creeks, a "colored" settlement on the edge of town. As tensions rise, Ada is threatened but refuses to abandon her plan to help the girl.

When Lillian dies, Ada is left without employment or a place to call home. And since Wyatt's primary purpose for staying in Hickory Ridge was to watch over his aunt, he can now pursue his dream of owning Longhorns in his home state of Texas. With their feelings for each other growing, Ada must decide whether she can trust God with her future and Wyatt with her heart.

Ada has loved deeply and lost dearly. But protecting her heart could mean missing the love of a lifetime.

Ada Wentworth may be young, but she's seen enough of life to know she can only rely on herself. Everyone including God it seems, has let her down. Having lost her family, her fiance, and her fortune, Ada journeys from Boston to Hickory Ridge, Tennessee, to take a position as a lady's companion. Though initially charmed by the pretty little Southern town tucked into the foothills of the great Smokies, Ada plans to stay only until she can earn enough to establish a millinery shop.

Her employer, Wyatt Caldwell, the local lumber mill owner, is easily the kindest, most attractive man Ada has met in Hickory Ridge. He believes Providence has brought her to town and into his life. But how, after so many betrayals, can she ever trust again? Besides, Wyatt has a dream of his own. A dream that will one day take him far from Hickory Ridge.

As the South struggles to heal in the aftermath of the Civil War, one woman must let go of her painful past in order to embrace God's plans for her. Can she trust Him, and Wyatt, with her future and her heart?

▼▲
"With well-drawn characters and just enough suspense to keep the pages turning, this winning debut will be a hit with fans of Gilbert Morris and Lauraine Snelling." - Library Journal

You'll adore this book from beginning to end. The story will capture your heart from the first line. Love uses romance and humor to tell the story of characters who are trying to better their lives and break down barriers. - 4 1/2 stars, Romantic Times

▼▲
I'm the author/artist and I want to review Beyond All Measure, Hickory Ridge Series #1.
Back
×
Back
×