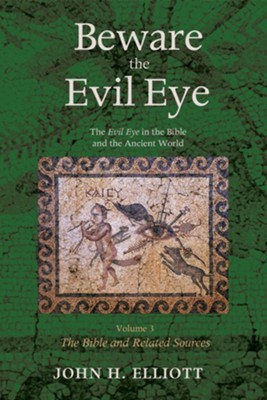 ▼▲
The Evil Eye is mentioned repeatedly throughout the Old Testament, Israel's parabiblical writings, and New Testament, with a variety of terms and expressions. The Old Testament (Greek Septuagint) contains no less than fourteen text segments involving some twenty explicit references to the Evil Eye (Deut 15:9; 28:54, 56; Prov 23:6; 28:22; Tob 4:7, 16; Sir 14:3, 6, 8, 9, 10; 18:18; 31:13; 37:11; Wis 4:12; 4 Macc 1:26; 2:15; Ep Jer 69/70). At least three further texts are also likely implied references to an Evil Eye (1 Sam 2:29, 32; 18:9), with some other texts as more distant possibilities. The Evil Eye is mentioned also in the Old Testament Pseudepigrapha, the Dead Sea Scrolls, and the writings of Philo and Josephus--all of which are discussed in the following pages. Evil Eye belief and practice continued in the early Jesus movement. Jesus mentions the Evil Eye on more than one occasion (Matt 6:22-23; Luke 11:33-36; Mark 7:22). Paul makes explicit and implicit mention of the Evil Eye in his letter to the Galatians (3:1; 4:12-20). Possible implicit references to the Evil Eye are also examined. Both the common and the distinctive features of biblical Evil Eye belief are identified, along with its operation on multiple levels (biological/physiological, psychological, economic, social, and moral) and its serving a variety of purposes. The numerous references to the Evil Eye in Israel's rabbinic writings and those of postbiblical Christianity (second-sixth centuries CE), together with the material evidence from this period, are examined in volume 4.

▼▲
John H. Elliott is Professor of New Testament Emeritus at the University of San Francisco. He is the author of Conflict, Community, and Honor (2007).

▼▲
I'm the author/artist and I want to review Beware the Evil Eye Volume 3: The Evil Eye in the Bible and the Ancient World-The Bible and Related Sources - eBook.
Back
Back