We are OPEN and SHIPPING - click here for shipping estimates
Beware These Are the Last Days
By: Lavonzo P. Latimer 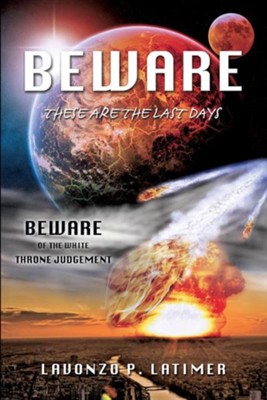 Beware These Are the Last Days

▼▲
One day billions of people will realize that there time has run out and the Rapture of the Church will surprise many like a thief in the night. What would you say if you're left behind? Where will you go to escape the horror of the most horrific time on earth called the tribulation period? Will you give in to the new world religion and its leader the False Prophet? Will you be deceived and led astray by one of the biggest lies ever told? Millions are being deceived by what they watch on television. How will millions survive the biggest persecution and slaughter of Christians in history, lead by the Unholy Trinity of Satan and his chosen Anti-Christ and False Prophet? In this book, I will discuss the Significance of studying bible prophecy and the History of the Jewish race. I will reveal the condition of the present church age, and touch on the Rapture of the Church and the Big Lie that is told which deceives billions on the earth. I will uncover and explain the Tribulation period and the origins of Armageddon which will lead Billions to The White Throne Judgment. Minister Lavonzo P Latimer has served the Lord God since 1996. He accepted his call in the Ministry back in October of 1999 and was licensed to preach in 2005 in Westland Michigan. Brother Latimer has four beautiful daughters and is happily married to his wife Lisa Latimer were they both teach Children's Church at Family Victor Fellowship in Southfield MI. If you've been blessed by this book and would like to order this book or contact me with your comments please e-mail me at latimerlavonzo@yahoo.com

▼▲
I'm the author/artist and I want to review Beware These Are the Last Days.
Back
×