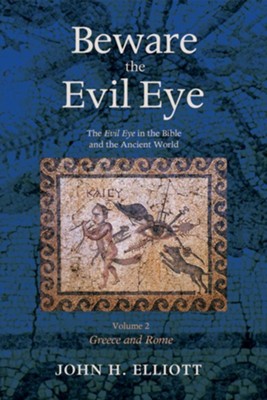 ▼▲
In the present volume, Elliott addresses the most extensive sources of Evil Eye belief in antiquity--the cultures of Greece and Rome. In this period, features of the belief found in Mesopotamian and Egyptian sources are expanded to the point where an ""Evil Eye belief complex"" becomes apparent. This complex of features associated with the Evil Eye--human eye as key organ of information, eye as active not passive, eye as channel of emotion and dispositions, especially envy, arising in the heart, possessors, victims, defensive strategies, and amulets--is essential to an understanding of the literary references to the Evil Eye. This volume, along with chapter 2 of volume 1, sets and illuminates the context for examining Evil Eye belief and practice in the Bible and the biblical communities (the focus of volume 3). ""Beware the Evil Eye, Volume 2, Greece and Rome, is a wonderful, comprehensive work of scholarship. Easy to read and erudite, Beware the Evil Eye is destined to become the definitive source text for anyone interested in the origins, spread and nature of this widespread human belief complex."" --Fiona Bowie, King's College London; author of The Anthropology of Religion ""John Elliott's Beware the Evil Eye is not simply a marvelous collection of literary texts, material objects, and gestures that bear on the 'evil eye;' it is ethnography at its best. Elliott not only collects a wealth of texts from Mediterranean antiquity and shows how numerous vocabularic items that might be misunderstood by the modern reader in fact betray beliefs in the evil eye. He has also collected material objects from as far afield as Sri Lanka and modern Britain, and discusses the varied bodily gestures used to ward off the evil eye and its moral locomotive, envy. Importantly, Elliott shows that evil eye practices are not to be dismissed as irrational, but are rational inferences from ancient understandings of the physiognomy of the eye and the nature of vision, and serve to makes sense of the vagaries of human experience. Elliott's achievement does not stop here: he demonstrates how evil eye beliefs are implicated in human envy, boasting, and other ordinary activities, and assembles a wealth of material objects and gestures that serve as prophylaxes against the evil eye. This will be a standard textbook in ethnography."" --John S. Kloppenborg, Study of Religion, University of Toronto This second volume of a work decades in the making extends the merits of the first: an assiduous comprehensiveness with regard to both method and evidence; an efficient, amicable exposition; an exuberance of illustration; and a compelling sense of the curious that takes full account of the integrity of the culturally different. Here we find the evil eye not only pervasive but central in the Greco-Roman world, making its discovery in the Bible and in Jewish and Christian antiquity, to be explored in volumes three and four, no surprise at all."" --Robert B. Coote, Senior Research Professor of Hebrew Exegesis and Old Testament, San Francisco Theological Seminary ""John H. Elliot's Beware the Evil Eye: The Evil Eye in the Bible and the Ancient World is a monumental achievement. A work of devoted and painstaking research focused on Greece and Rome, volume 2 of the four-volume study provides detailed analysis of the ancient folkloric belief in the evil eye. This is the work of a brilliant intellect, who has given us the last scholarly word on this perplexing ancient belief. The book is essential reading for anthropologists, biblical and classical scholars, medievalists, folklorists, and art historians. No one will have anything to add to this conversation for the imaginable future."" --Brenda Deen Schildgen, Distinguished Professor Comparative Literature, Chair Letters and Science Executive Committee, UC Davis John H. Elliott is Professor of New Testament Emeritus at the University of San Francisco. He is the author of Conflict, Community, and Honor (2007).

▼▲
I'm the author/artist and I want to review Beware the Evil Eye Volume 2.
Back