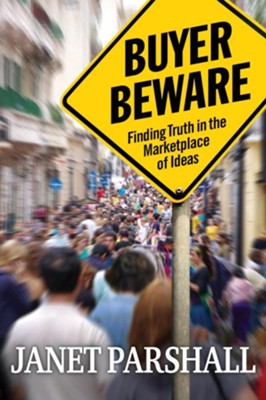 Have you ever thought why it is that so many Christians are reticent to enter into the ’marketplace of ideas?’ Jesus commanded us to go into the world to deliver His message of truth, delivered in love. But He never said it would easy.

In Buyer Beware, Janet Parshall takes the reader on a journey through the public square where ideas are ’bought’ and ’sold’ but where Truth is sometimes difficult to find. She examines some of the most controversial issues being debated in our culture today, by looking at them through the lens of Scripture.

Using the prophet Jeremiah’s instructive letter to the exiles, held in Babylonian captivity, Parshall shows how a people, held captive in a sin-sick, fallen world, can live abundantly and triumphantly by loving God’s truth and by boldly declaring it in the public square. Buyer Beware is designed to encourage modern day saints as they enter the ’marketplace’ by helping them discover the richness of God’s word and the poverty of the world’s message.

▼▲
JANET PARSHALL is a graduate of Carroll College in Wisconsin. She has been consistently profiled as one of the top 100 "talkers" in Talkers magazine, the leading trade publication of the talk industry. Throughout her career, Janet has been a devoted advocate of the principles and policies that strengthen the family. In February 2005, Parshall was selected by President George W. Bush to represent the White House as public delegate to the United Nations Commission on the Status of Women. Janet is a columnist for LIFE: Beautiful magazine and the author of several books. She and her husband, Craig, live in Virginia, and have four children and six grandchildren.

A clearly thought out presentation, Buyer Beware can motivate people to consider better solutions to social problems. The author presents practical actions that range from easy to more difficult, but can impact the culture for good. Jeremiah’s message was to ’work for the good of the city where you live’, because that brings peace for everyone as God desires. After just finishing this book, I am wishing to thank you for writing it.

Although I listen to nearly all your radio programs via podcasts, this book composed almost all of them between its covers. It is a thoughtful and engaging book!  I host and teach inductive studies in my home and beloved church. Often I add a book for discussion during our fellowship time. This one is next on the list!

▼▲
I'm the author/artist and I want to review Buyer Beware: Finding Truth in the Marketplace of Ideas / New edition - eBook.
Back
×
Back
×