Skip to main content
SPRING CYBER EVENT STARTS NOW: And it's a really BIG deal! Up to 88% off through 5/24>
Beverly Lewis Amish Romance Collection
By: Beverly Lewis
Stock No: WW231648 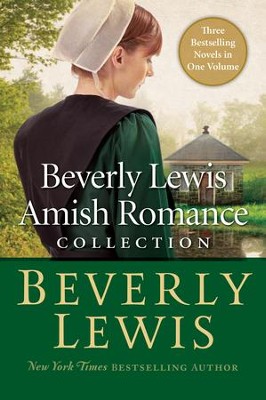 The Bridesmaid
Twenty-seven-year-old Joanna Kurtz has made several trips to the altar, but never as a bride. The single young Amish woman is a closet writer with a longing to be published--something practically unheard of in her Lancaster County community. Yet Joanna's stories aren't her only secret. She also has a beau who is courting her from afar, unbeknownst even to her sister, Cora, who, though younger, seems to have suitors to spare.
Eben Troyer is a responsible young Amishman who hopes to make Joanna Kurtz his bride--if he can ever leave his parents' farm in Shipshewana, Indiana. Yet with his only brother off in the English world, intent on a military career, Eben's hopes for building a life with his dear Joanna are dimming, and patience is wearing thin. Will Joanna ever be more than a bridesmaid?

The Secret Keeper
With her love for all things old-fashioned, Jennifer Burns has often been told she's an "old soul," but no one is prepared for the twenty-four-year-old's decision to set aside her modern life in favor of the Old Order world of the Lancaster County Amish. Yet Jenny does exactly that, adopting Plain dress and settling in with Samuel and Rebecca Lapp while she works as a mother's helper for the bishop's wife-a far cry from her former job.
The people of Hickory Hollow are curious about the beautiful young seeker among them, one handsome Amishman in particular. But he is not the only man vying for Jenny's affections, and Jenny faces many challenges in the Proving time the brethren have set for her . . . challenges of the heart, as well as the spirit.

The Photograph
Eva is reeling from her sister Lily's disappearance. Did an outsider woo her away? Meanwhile, buggy maker Jed Stutzman finds a snapshot of an Amish woman. When he walks into Eva's sweet shop with the mysterious picture, Eva is drawn to the handsome stranger---but the woman in the photograph is no stranger at all!

▼▲
A 3-in-1 Amish romance collection that will include the books The Bridesmaid, The Secret Keeper, and The Photograph.

▼▲
Beverly Lewis (www.beverlylewis.com), born in the heart of Pennsylvania Dutch country, has more than 17 million books in print. Her stories have been published in twelve languages and have regularly appeared on numerous bestseller lists, including the New York Times and USA Today. Beverly and her husband, David, live in Colorado, where they enjoy hiking, biking, making music, and spending time with their family.

▼▲
I'm the author/artist and I want to review Beverly Lewis Amish Romance Collection.
Back
Back