Skip to main content
Between the Swastika and the Sickle: The Life, Disappearance, and Execution of Ernst Lohmeyer
By: James R. Edwards
Stock No: WW876188 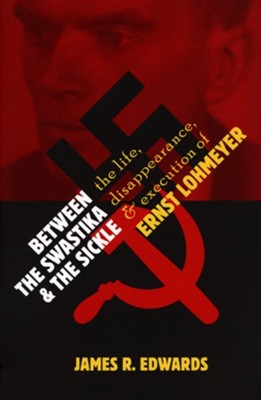 Between the Swastika and the Sickle: The Life, Disappearance, and Execution of Ernst Lohmeyer

Between the Swastika and the Sickle explores the life, theological contribution, and mysterious disappearance of Ernst Lohmeyer, one of the more important New Testament scholars in the twentieth century.

On February 15, 1946, the Soviet NKVD raided the home of Ernst Lohmeyer just hours before his inauguration as the president of Greifswald University in Germany. Lohmeyer had survived active duty in both World War I and World War II. A New Testament scholar and theologian, he resisted the rise of Nazi fascism as a member of the Confessing Church. But the Soviet occupation of Germany was even more repressive than Nazi domination. With the exception of correspondence from prison, Lohmeyer was never heard from again.

In Between the Swastika and the Sickle, James R. Edwards recounts the story of Lohmeyer’s life, his theological achievements, his courageous resistance to the forces of political repression, and the events surrounding his death. But the book also includes Edwards’s intrepid search for the legacy of this brilliant and courageous scholar, whose story is made even more compelling by the tumultuous interplay of faith and politics in twenty-first-century America.

▼▲
James R. Edwards is the Bruner-Welch Professor Emeritus of Theology at Whitworth University. He lectures widely on theological subjects and is the author of Is Jesus the Only Savior? as well as commentaries on Romans and the Gospels of Mark and Luke.

▼▲
Susannah Heschel
— author of The Aryan Jesus: Christian Theologians and the Bible in Nazi Germany
"James Edwards has composed an important and wonderfully written biography of a pivotal figure in the study of the New Testament, Ernst Lohmeyer. Even more: this book gives us a fascinating depiction of German theological scholarship before, during, and after the Nazi years."

John P. Burgess
— author of The East German Church and the End of Communism and Holy Rus’: The Rebirth of Orthodoxy in the New Russia.
"This beautifully written book is more than a biography. It is, above all, an exercise in remembering and honoring the Christian struggle to live with truth and integrity under conditions of political repression. Edwards not only recovers Ernst Lohmeyer’s story but also draws us compellingly into his own life journey as a Christian scholar and pastor. Skillfully weaving together archival research, interviews, and personal experiences on ’the other side,’ Edwards offers us a theological thriller that will interest scholars and, indeed, all who wish to learn from the Christian legacy of twentieth-century Germany."

Christopher Gehrz
— Christianity Today
"Whenever I teach the history of 20th-century Europe, I incorporate stories from Christians who resisted the evils of totalitarianism. . . . Thanks to theologian James R. Edwards, this fall I can add one more name to that cloud of witnesses: the German Lutheran Ernst Lohmeyer, who stood fast against Nazism as survived fighting in two world wars, only to be executed by Soviet authorities in 1946."

Gospel Coalition
"Edwards gives us a biography of a man, not just a martyr. While the martyr inspires us, the man reflects us. Edwards shows us the Lohmeyer we need as an example in life and learning."

Currents in Theology and Mission
"Given his principled and public position as an early and committed foe of the Nazis, defender of Jews (especially Jewish academic colleagues), and member of Germany’s Confessing Church, I find it amazing that Lohmeyer’s story is not better known. Edwards is equipped as a fellow biblical scholar to appreciate the variety and depth of Lohmeyer’s scholarship and devotional writing."

Journal for the Study of the New Testament
"This book succeeds magnificently in perpetuating [Lohmeyer’s] memory, which the Soviets sought to expunge."

The Journal of Theological Studies
"An absorbing and intriguing endeavour to rescue the life and writings of a German theologian from public oblivion."

Religious Studies Review
"Edwards produces an invaluable supplemental textbook for courses like NT theology and hermeneutics. Readers receive not only a page-turning narrative, but also an embedded education (or review) on the rise and fall of Germany, and the emergence of modern New Testament studies."

▼▲
I'm the author/artist and I want to review Between the Swastika and the Sickle: The Life, Disappearance, and Execution of Ernst Lohmeyer.
Back
Back