Skip to main content
THE MEGA CHRISTMAS SALE: Save up to 85% off through 10/19 >
Between Heaven and Hell: A Dialog Somewhere Beyond Death with John F. Kennedy, C. S. Lewis and Aldous Huxley
By: Peter Kreeft
Stock No: WW848652 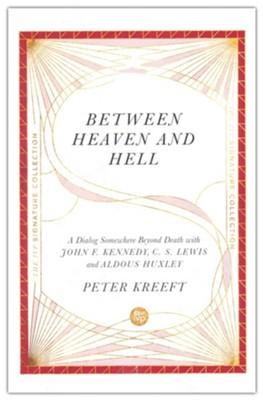 Between Heaven and Hell: A Dialog Somewhere Beyond Death with John F. Kennedy, C. S. Lewis and Aldous Huxley

On November 22, 1963, three great men died within a few hours of each other: C. S. Lewis, John F. Kennedy and Aldous Huxley. All three believed, in different ways, that death is not the end of human life. Suppose they were right, and suppose they met after death. How might the conversation go?

Peter Kreeft imagines their discussion as part of the great conversation that has been going on for centuries about life's biggest questions. Does human life have meaning? Is it possible to know about life after death? What if one could prove that Jesus was God? With Kennedy taking the role of a modern humanist, Lewis representing Christian theism and Huxley advocating Eastern pantheism, the dialogue is lively and informative.

With clarity and wit, Between Heaven and Hell presents insightful responses to common objections to the Christian faith. This classic apologetics work is now available as part of the IVP Signature Collection, which features special editions of iconic books in celebration of the seventy-fifth anniversary of InterVarsity Press.

Peter Kreeft (PhD, Fordham University) is professor of philosophy at Boston College, where he has taught since 1965. A popular lecturer, he has also taught at many other colleges, seminaries, and educational institutions in the eastern United States. Kreeft has written more than fifty books, including The Best Things in Life, The Journey, and Handbook of Christian Apologetics (with Ronald Tacelli).

"For years I'd heard about this book. Some time ago, I decided to read it. I was not disappointed. If you want to read an engaging book that shows the collision of three worldviews, you can hardly find a better one than this. I'm excited to see it become available in a new edition."

-- Trevin Wax, general editor of The Gospel Project and author of Rethink Your Self

"So often reason and imagination are seen in tension or conflict, but Kreeft's classic piece of posthumous fictional dialog powerfully illustrates the prospect of their seamless integration. Rife with no-nonsense uncommon common sense, not to mention unapologetic apologetics, it explores timely and timeless questions—from the nature and primacy of reality to the power and purpose of evidence, argument, and even debate—in an utterly charming, engaging way. Eminently readable and a veritable delight to relish, it takes truth with sober seriousness yet also with playfulness, creativity, and a winsomely light touch. Its longevity and enduring impact are no mystery."

-- David Baggett, professor of philosophy and director of the Center for Moral Apologetics, Houston Baptist University

"Clarity, simplicity, and humor are rare combinations in books addressing philosophy and history. Yet all three converge in Kreeft's Between Heaven and Hell. But another ingredient in this work is fairness. Kreeft's imagined dialog doesn't stack the deck in Christianity's favor. Instead, he presents formidable counterarguments and objections that are true to the positions Huxley and Kennedy held. And the new material, a dialog that imagines 'A World Without an Easter,' is poignant and powerful. This short book will have a long effect on every reader."

"Revealing and easy to read."

▼▲
I'm the author/artist and I want to review Between Heaven and Hell: A Dialog Somewhere Beyond Death with John F. Kennedy, C. S. Lewis and Aldous Huxley.
Back