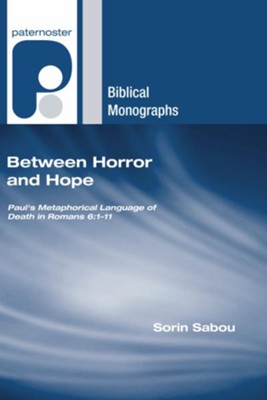 Between Horror and Hope

▼▲
'Between Horror and Hope' is a study of Paul's metaphorical language of death in Romans 6:1-11. The scholarly debate focuses on two main issues; the origin of the 'commentatio mortis' tradition and its development. Dr. Sabou argues that the origin of this terminology is original to Paul; that it was the apostle's own insight into the meaning of Christ's death (a death to sin) and his understanding of the identity of Christ in his death (as the anointed davidic king) which guided him to create this metaphor of dying to sin as a way of describing the relationship of the believer with sin. On the development of this language of death, the author argues that this language conveys two aspects -- horror and hope. The first is discussed in the context of crucifixion in which Paul explains the believer's death to sin by presenting Christ's death as the death of the anointed davidic king who won the victory over sin and death by rising from the dead. Paul affirms that believers are coalesced with what was proclaimed about Christ's death and resurrection, thereby allowing him to assert that the releasing of the body from the power of sin is a result of crucifixion. This crucifixion is the condemnation inflicted on our past lives in the age inaugurated by Adam's sin and this is such a horrible event that believers have to stay away from sin since sin leads to such punishment. In contrast, hope is presented in the context of burial. The believers' burial with Christ points to the fact that they are part of Christ's family and this is accomplished by the overwhelming action of God by which he pushes us toward the event of Christ's death, an act pictured in baptism. It is this burial with Christ that allows believers to share with Christ in newness of life By careful exegesis and clear argument Sabou demonstrates that the death of Christ in Romans 6 is intended by Paul to be read not as the death of an isolated individual but as that of the anointed Davidic king. For Sabou, Christ is the firstborn within a large family of faith. Being buried with Christ brings believers into the same 'house, ' or family dynasty, so that by sharing in his death they also share in his resurrection glory. This is a welcome, fresh reading of Romans based on detailed exegesis and careful analysis of the metaphorical language of 'death' which reveals the centrality of the death of Christ for Christian theology as well the corporate nature of Paul's Christological thinking. A lucid and carefully researched study which makes a solid contribution to contemporary interpretation of Romans. --William S. Campbell, Reader of Biblical Studies, University of Wales, Lampeter Sorin Sabou takes a fresh look at a most important text (Romans 6:1-11), and provides new and enriching insights, particularly into the nature of our union with Christ. An important resource for scholars and preachers alike. --Stephen Motyer, Lecturer in New Testament, London School of Theology Sorin Sabou (PhD, London School of Theology) is a lecturer at the Baptist Theological Institute, Bucharest, and is Pastor of the Romanian Baptist Church at Brasov, Romania.

▼▲
I'm the author/artist and I want to review Between Horror and Hope.
Back