Skip to main content
Between Heaven and Ground Zero: One Woman's Struggle for Survival and Faith in the Ashes of 9/11 - eBook
By: Leslie Haskin
Stock No: WW9956EB 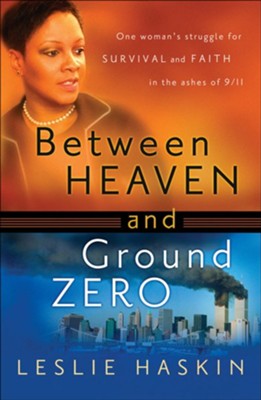 Between Heaven and Ground Zero: One Woman's Struggle for Survival and Faith in the Ashes of 9/11 - eBook

▼▲
Leslie Haskin had a successful career and an office in the World Trade Center when the attacks happened on 9/11. This is the story of her harrowing escape and subsequent life-change in perspective and priorities. Surviving the tragedy turned her heart back to God and she now embraces a life of service to others.

▼▲
A Second Chance at Life

On the sunny morning of Tuesday, September 11, 2001, terrorists murdered more than twenty-seven hundred people in an attack on New York City.

Thousands died when a hijacked Boeing 767 slammed into Tower One of the World Trade Center.

It was first blood.
For Leslie Haskin, it was a second chance at life.

This is the riveting account of Leslie's harrowing escape--down 36 floors in a doomed and dying building and away from a life focused on perks, prestige, and power. The intervening months brought crippling mental and emotional distress, but from the rubble and ashes, the corporate climber rediscovered the faith of her childhood and now embraces a new life of serving others.

▼▲
Leslie Haskin achieved great success at Kemper Insurance Company in New York City. She became the Director of Operations and one of only two African Americans to hold executive title within the corporation's eastern region. But 9/11 changed her priorities. In addition to her career, Leslie is active in outreach ministry, serving with Goodwill Evangelical Presbyterian Church in Montgomery, New York. She spends her time in the inner city spreading the message of hope to the homeless and otherwise lost. She is the founder and executive director of Safe Hugs, a nonprofit organization designed to provide rehabilitation and healing to women and children who are homeless and victims of domestic violence. Leslie has appeared at several memorials honoring the victims and survivors of 9/11. She has served as keynote speaker at national and regional conferences throughout the United States, including The West Point Women of the Chapel and North American Missions Board--World Changers. She lives in Newburgh, New York.

▼▲
I'm the author/artist and I want to review Between Heaven and Ground Zero: One Woman's Struggle for Survival and Faith in the Ashes of 9/11 - eBook.
Back
Back