Skip to main content
Between Exaltation and Infamy: Female Mystics in the Golden Age of Spain
By: Stephen Haliczer
Stock No: WW148633 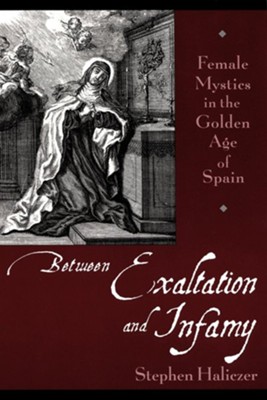 Between Exaltation and Infamy: Female Mystics in the Golden Age of Spain

▼▲
One day in 1599, in the Spanish village of Saria, seven-year-old Maria Angela Astorch fell ill and died after gorging herself on unripened almonds. Maria's sister Isabel, a nun, came to view the body with her mother superior, an ecstatic mystic and visionary named Maria Angela Serafina.
Overcome by the sight of the dead girl's innocent face, Serafina began to pray fervently for the return of the child's soul to her body. Entering a trance, she had a vision in which the Virgin Mary gave her a sign. At once little Maria Angela started to show signs of life. A moment later she
scrambled to the ground and was soon restored to perfect health.

During the Counter-Reformation, the Church was confronted by an extraordinary upsurge of feminine religious enthusiasm like that of Serafina. Inspired by new translations of the lives of the saints, devout women all over Catholic Europe sought to imitate these "athletes of Christ" through extremes
of self-abnegation, physical mortification, and devotion. As in the Middle Ages, such women's piety often took the form of ecstatic visions, revelations, voices and stigmata.

Stephen Haliczer offers a comprehensive portrait of women's mysticism in Golden Age Spain, where this enthusiasm was nearly a mass movement. The Church's response, he shows, was welcoming but wary, and the Inquisition took on the task of winnowing out frauds and imposters. Haliczer draws on fifteen
cases brought by the Inquisition against women accused of "feigned sanctity," and on more than two dozen biographies and autobiographies. The key to acceptance, he finds, lay in the orthodoxy of the woman's visions and revelations. He concludes that mysticism offered women a way to transcend, though
not to disrupt, the control of the male-dominated Church.

▼▲
Stephen Haliczer is Distinguished Research Professor of History at Northern Illinois University. He is the author of Sexuality in the Confessional: A Sacrament Profaned (Oxford, 1996) and many other books and articles.

▼▲
I'm the author/artist and I want to review Between Exaltation and Infamy: Female Mystics in the Golden Age of Spain.
Back