Skip to main content
CUSTOMER APPRECIATION SALE: Thousands of starry deals through 6/22!
Between Before and After
By: Maureen Doyle McQuerry
Stock No: WW767283 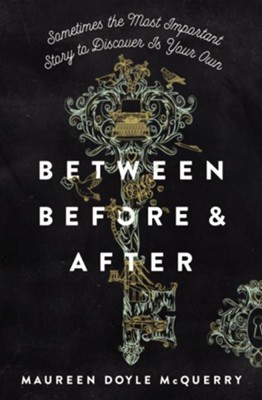 Between Before and After

▼▲
Worried 14-year-old Molly needs her mom more than ever, but author Elaine Donnelly shuts out real human connections and buries herself in the strangers she writes about. Knowing her mother nurses a carefully kept secret, Molly digs into her past---and finds something that could unlock a family mystery. Will the truth save their future---or destroy it? Softcover edition.

A mother being dragged ever deeper into the icy waters of depression. A daughter who finds a devastating secret about a shadowy past buried in her mom’s dresser. And the key to unlocking a long-hidden family mystery that could save or destroy much more than their two lives.

Fourteen-year-old Molly worries about school, friends, and her parents’ failed marriage, but mostly about her mother Elaine’s growing depression. Molly knows her mother, who shuts herself off from human connections and instead buries herself in the lives and deaths of the strangers she writes about, is nursing her own carefully-kept secret. But in Elaine’s raw and fragile state, Molly knows not to pry too deeply.

Until her Uncle Stephen is thrust into the limelight because of his miracle cure of a young man and her mother can no longer hide behind other people’s stories. As Molly digs into her mother’s past, she finds a secret hidden in her mother’s dresser that may be the key to unlocking a family mystery dating to 1918 New York—a secret that could save or destroy their future.

Between Before and After is:

Maureen McQuerry is an award-winning novelist, teacher, and sometime poet. Her novels include, The Peculiars  (ALA Best Book for Young Adult Readers 2013, and winner of the Westchester Award), the MG Time Out of Time duet: Beyond the Door and The Telling Stone (Booklist top Ten Fantasy/SciFi for Youth) that combines, Celtic myth, shapeshifters and a secret code in a coming of age story, and the YA historical, Between Before and After (Blink/HarperCollins 2/5/2019). She lives with her husband in WA State and spends her time between the Columbia River and the Puget Sound and traveling to where ever life's next real life mystery make take her.

▼▲
A beautifully layered story of secrets, hope, and change. This gem of a novel has all the hallmarks of a classic. -- Megan Chance, bestselling, critically acclaimed, award-winning author of the Fianna Trilogy

Maureen's flowing prose pulls the reader in closely to the harsh realities of life for children in 1918 New York City, but also conveys the strength of a sister's love for her brother when everything dear to them is ripped away. The dual narratives of Molly and Elaine grip the reader in a crescendo of suspense that pays off like a favorite fairy tale. -- Mary Cronk Farrell, award-winning author of Pure Grit and the upcoming Standing Up Against Hate

This coming-of-age novel about a mother and daughter delves into the complex nature of relationships with an earnest voice and vivid details. Highly recommended! -- Stephanie Morrill, author of The Lost Girl of Astor Street and Within These Lines

In Between Before and After, Maureen McQuerry weaves two equally captivating storylines into a seamless and moving tale of a daughter's search for her mother's truth. There's no better way to say it than this--I loved this book! -- Suzanne Selfors, bestselling author of the Imaginary Veterinary series and the Wedgie & Gizmo series

Between Before and After is that rare novel where you want to turn the pages quickly but must resist because you want to savor every word. McQuerry's richly rendered settings of New York City in 1918 during the flu pandemic and San Jose, California, in 1955 feature conflicted characters in challenging real-life situations. An unforgettable read, start to finish. -- Stephen Wallenfels, author of Bad Call (Disney/Hyperion) and Deadfall

Elaine (Lainey) and Molly each have a story to tell in this dual perspective historical novel. One was orphaned in the years following World War I. The other is her daughter years later, who wants her mother to pay more attention to her and seeks to uncover her mother's secrets. In the middle of those two narratives is the story of Uncle Stephen, a Catholic school teacher, who prays for a boy with a tumor and it disappears--is Uncle Stephen a miracle worker? Lainey's tale begins in 1919, and Molly's perspective starts in 1955. McQuerry interweaves the folktale of 'Hansel and Gretel' throughout the plot. The identity of Uncle Stephen, and the nature of his 'miracle,' eventually paves the way for a surprise ending. While Catholicism has a major place in the story, it is not preachy or pushing for conversion. Chapter headings indicate who is narrating, which helps readers keep read track of the time period of each section. Teens will easily be engrossed in the lives and challenges of the protagonists as the novel progresses. The well-researched historical details help set the context of the tale. VERDICT A well-told story about family relationships and the importance of trust and truth-telling. A good choice for medium to large collections.--Jane Mouttet, Mesilla Valley Christian School, Las Cruces, NM -- School Library Journal

▼▲
I'm the author/artist and I want to review Between Before and After.
Back