Skip to main content
CUSTOMER APPRECIATION SALE: Thousands of starry deals through 6/22!
Between One Faith and Another: Engaging Conversations on the World's Great Religions - eBook
By: Peter Kreeft
Stock No: WW95151EB 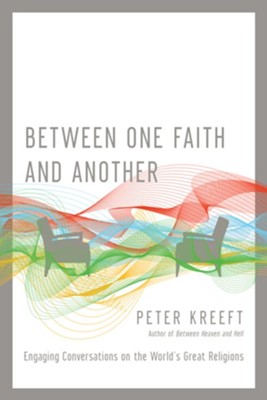 Between One Faith and Another: Engaging Conversations on the World's Great Religions - eBook

▼▲
How can we know if one religion is more true than another? Peter Kreeft, in his work Between One Faith and Another, has created a three-part conversation exploring the world's different faiths. Through these conversations the plausibility of major world religions such as: Hinduism, Buddhism, Zen, Confucianism, Taoism, Judaism, Islam, and Christianity are explored. Each dialogue provides insightful ways to think critically and fairly about these competing religious beliefs, while ultimately remaining true to the exclusivity of Christ.

▼▲
How do we make sense of the world's different religions? In today's globalized society, religion is deeply intertwined with every issue we see on the news. But talking about multiple religions can be contentious. Are different faiths compatible somehow? And how can we know whether one religion is more true than another? In this creative thought experiment, Peter Kreeft invites us to encounter dialogues on the world's great faiths. His characters Thomas Keptic and Bea Lever are students in Professor Fesser's course on world religions, and the three explore the content and distinctive claims of each. Together they probe the plausibility of major religions, from Hinduism and Buddhism to Christianity and Islam. Along the way they explore how religions might relate to each other and to what extent exclusivism or inclusivism might make sense. Ultimately Kreeft gives us helpful tools for thinking fairly and critically about competing religious beliefs. If the religions are different kinds of music, do they together make harmony or cacophony? Decide for yourself.

▼▲
Peter J. Kreeft (Ph.D., Fordham University) is professor of philosophy at Boston College where he has taught since 1965. A popular lecturer, he has also taught at many other colleges, seminaries and educational institutions in the eastern United States. Kreeft has written more than fifty books, including The Best Things in Life, The Journey, How to Win the Culture War and, with Ronald Tacelli, Handbook of Christian Apologetics.

▼▲
"The book affords an engaging, informative, and edifying read if the reader is committed to the intellectual rigor necessary to follow implications at the theoretical and existential level." -- Arturo Gastelum, Reviews in Religion and Theology, 25:3 (2018)

"I would recommend this book to anyone trying to reach this postmodern millennial generation. Yet, this recommendation comes with a caveat: Be prepared to be challenged in your own thinking about how the three dimensions of theology, morality, and liturgy all function Between One Faith and Another." -- Kirk L. Barger, The Journal of Ministry & Theology, Spring 2018

▼▲
I'm the author/artist and I want to review Between One Faith and Another: Engaging Conversations on the World's Great Religions - eBook.
Back
Back