Skip to main content
Betty Bunny Wants Everything
By: Michael B. Kaplan
Illustrated By: Stephane Jorisch
Stock No: WW734080 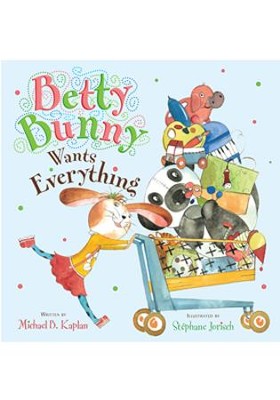 ▼▲
Preschooler Betty Bunny is back and testing her limits. Luckily, she is a loveable handful nobunny can resist.

This hardcover picture book in the Betty Bunny series is by author Michael B. Kaplan, creator of Disney’s T.V. series Dog with a Blog.

Betty Bunny doesn’t know why she can only buy one toy in the toy store when she wants them all. Her family tells Betty Bunny she can’t have everything she wants and come up with a lesson to teach her the value of money and spending limits. But the precocious bunny comes up with a hilarious loophole. Betty Bunny’s preschool perspective and negotiating skills will leave you in stitches.

▼▲
A native of Wayland, Massachusetts, Michael Kaplan wrote plays and musicals throughout high school and at Princeton University, where he attended college. Upon graduation he moved to New York where a number of his plays received productions and staged readings, primarily at The Ensemble Studio Theatre, where he is a member. For the past twenty-two years, he has lived in Los Angeles, working as a television writer and producer on a total of twelve different prime time shows for ABC, NBC, FOX, and UPN. His career as a comedy writer has included stints as a writer and Supervising Producer on two of television's most respected comedies, Roseanne and Frasier. For his work on the latter, he received an Emmy award, as a member of the producing staff, for best comedy series. He co-created and Executive Produced I'm In the Band for Disney XD. His new show, Dog With a Blog will be premiering on Disney Channel in the fall of 2012. He is the author of Betty Bunny Loves Chocolate Cake and Betty Bunny Wants Everything. He currently resides in Los Angeles with his wife and three children.

Stephane Jorisch has illustrated numerous picture books, including New Year at the Pier, Granddad's Fishing Buddy, The Real Story of Stone Soup, and Jabberwocky, for which he won the prestigious Governor General's Award, the Canadian equivalent of the Caldecott. Mr. Jorisch lives with his wife and three children in Montreal, Canada.

"Kaplan again has his finger on the pulse of childhood insatiability . . . Audiences will recognize the impulses, celebrate the disaster, and take sly pleasure in Betty's victory over parental reason." — The Bulletin of the Center for Children's Books

"Toddlers and parents of toddlers will surely relate to this hilarious handful of a rabbit girl." — Booklist

▼▲
I'm the author/artist and I want to review Betty Bunny Wants Everything.
Back