Skip to main content
SPRING CYBER EVENT STARTS NOW: And it's a really BIG deal! Up to 88% off through 5/24>
Betty Bunny Wants a Goal
By: Michael Kaplan
Illustrated By: Stephane Jorisch
Stock No: WW738591 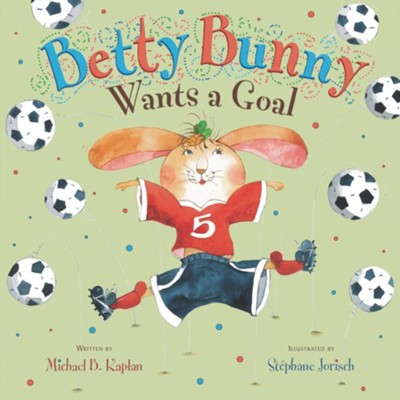 ▼▲
For fans of Ladybug Girl and Charlie & Lola, check out the loveable handful nobunny can resist! Betty Bunny puts her own funny preschool spin on soccer (and practice). From the creator of Disney’s T.V. series Dog with a Blog.

Soccer is the first sport most kids play, and Betty Bunny is taking the field. She proudly announces that she will score ten goals in her first game. But like most preschoolers, Betty Bunny's ideas are not exactly in line with reality. When she fails to score a single goal, she decides that "soccer is yucky" and stuffs her uniform in the trash. Now it's up to her family to help Betty Bunny see the value of not giving up when things get hard. In a story about hard work and achieving your goals, Betty Bunny learns that with practice, she can do anything. But in Betty Bunny's world, this lesson has surprising results.

▼▲
Michael Kaplan is the creator of Dog With a Blog on the Disney Channel, and is an Emmy award-winning television writer and producer. His career as a comedy writer included stints on two of television's most respected comedies, Roseanne and Frasier. He co-created and Executive Produced I'm In the Band for Disney XD.  He currently resides in Los Angeles with his wife and three children.Stephane Jorisch has illustrated numerous picture books, including New Year at the Pier, Granddad's Fishing Buddy, The Real Story of Stone Soup, and Jabberwocky, for which he won the prestigious Governor General's Award. He was also nominated for the Hans Christian Anderson Award. Mr. Jorisch lives with his wife and three children in Montreal, Canada.

▼▲
I'm the author/artist and I want to review Betty Bunny Wants a Goal.
Back