Skip to main content
Betty Bunny Didn't Do It
By: Michael Kaplan
Illustrated By: Stephane Jorisch
Stock No: WW738584 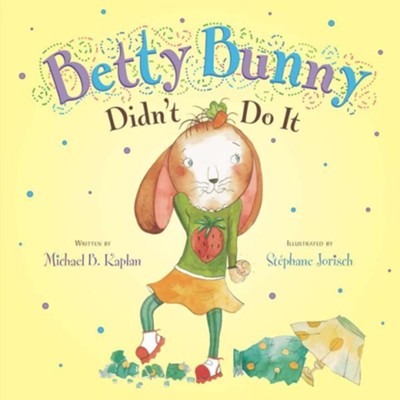 Betty Bunny Didn't Do It

From the creator of Disney’s Dog with a Blog, this funny book in the Betty Bunny series shows the value of honesty from a preschooler’s special point of view.

When Betty Bunny breaks a lamp, she has a brand-new idea: Blame it on someone else (like the Tooth Fairy)! Then a vase gets broken and Betty Bunny really didn't do it. But now no one in her family believes her. Honest lies, white lies, crying wolf—how can one four-year-old figure out the right thing to do?

▼▲
Michael Kaplan is an Emmy award-winning television writer and producer and his career as a comedy writer included stints on two of television's most respected comedies, Roseanne and Frasier. He co-created and Executive Produced I'm In the Band for Disney XD. His new show, Dog With a Blog will be premiering on Disney Channel in the fall of 2012. He currently resides in Los Angeles with his wife and three children.Stephane Jorisch has illustrated numerous picture books, including New Year at the Pier, Granddad's Fishing Buddy, The Real Story of Stone Soup, and Jabberwocky, for which he won the prestigious Governor General's Award. He was also nominated for the Hans Christian Anderson Award. Mr. Jorisch lives with his wife and three children in Montreal, Canada.

▼▲
Praise for Betty Bunny Didn't Do It:

* “Kaplan and Jorisch are as skilled as ever at detailing the barely contained chaos of a household full of big personalities, as well as the sense of logic, injustice, and self-interest that drives Betty Bunny’s outlook.” -Publishers Weekly starred review

“An inventive plot and charming illustrations depict an irrepressible main character who continues to be quite a handful:  Betty Bunny does it again.” –Kirkus Reviews

▼▲
I'm the author/artist and I want to review Betty Bunny Didn't Do It.
Back