We are OPEN and SHIPPING - click here for shipping estimates
PRE-SUMMER CYBER SALE EXTENDED thru 6/1 ~ Over 2,500 items up to 90% off
Better Than a Lemonade Stand: Small Business Ideas For Kids - eBook
By: Daryl Bernstein
Illustrated By: Rob Husberg 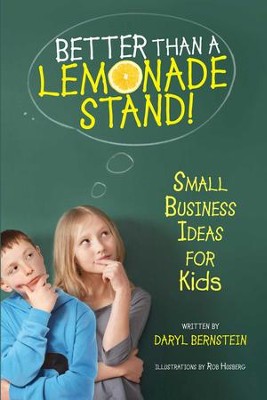 ▼▲
Start on the early road to success while having fun, learning new skills, and making money with this guide of more than fifty entrepreneurial ideas.

Filled with delightfully simple business ideas, Better than a Lemonade Stand! is a fun guide packed with creative ideas that show how to start a business with little or no start-up costs, attract and retain customers, develop negotiating skills, and more.
Originally written and published when the author was only fifteen years old, Better than a Lemonade Stand! has already helped thousands of kids start their own profitable small businesses. Now an adult and father himself, Daryl Bernstein has polished and expanded his book for a new generation of budding entrepreneurs.
This indispensable resource includes more than fifty, fun, simple business ideas—complete with tips about supplies, time needed, what to charge, and how to advertise—all completely updated with strategies based on Bernstein’s own experience as a successful entrepreneur and father.

▼▲
Daryl Bernstein is a lifetime entrepreneur. At the age of 8, he started his first business, a lemonade stand. At the age of 12, he spotted a need and founded Global Video on his family's kitchen table. As a teenager, he grew the business into the leading U.S. producer and distributor of educational videos. When Daryl was 24, Nasdaq-listed School Specialty, Inc., the nation's largest school supplier, acquired Global Video.

Daryl is the author of The Venture Adventure and Better Than a Lemonade Stand, both originally written when Daryl was just a teenager. He is now the founder and CEO of RightSignature, a software-as-a-service company providing the easiest, fastest way to get documents signed. His entrepreneurial ventures have been featured on CNN, CBS, NPR, and the BBC, and in Chicken Soup for the Entrepreneur's Soul, The Wall Street Journal, and The New York Times.

▼▲
I'm the author/artist and I want to review Better Than a Lemonade Stand: Small Business Ideas For Kids - eBook.
Back
×
Back
×