We are OPEN and SHIPPING - click here for shipping estimates
Betsy's Story, 1934 - eBook
By: Adele Whitby 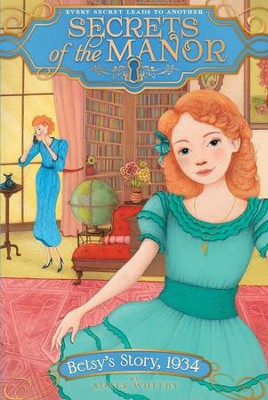 By: Adele Whitby
More in Secrets of the Manor Series
Simon Spotlight / 2015 / ePub
Write a Review
In Stock
Stock No: WW66191EB

▼▲
Someone is causing trouble at Chatswood Manor and it’s up to Betsy to find the culprit before it’s too late in the fifth book of this fascinating historical fiction series.

Betsy Northrop is about to turn twelve years old and per her family’s tradition, plans are underway for a magnificent birthday ball in her honor. Despite troubling times elsewhere, Betsy’s family is thriving, thanks to the good choices of Betsy’s mother, Beth. But then mishaps—both trivial and disastrous—start plaguing Chatswood Manor. Is someone determined to bring the family to ruin? Betsy vows to expose the culprit, but her home is one where secrets are easily hidden away. Will Betsy be able to uncover the truth and set things right?

▼▲
Adele Whitby wishes she lived in a grand manor home with hidden rooms and tucked-away nooks and crannies, but instead she lives in the next best thing—a condo in Florida with her husband and their two dogs, Molly and Mack. When she’s not busy writing, you can usually find her reading and relaxing on the beach under a big umbrella. She loves getting lost in a good story, especially one set in a faraway place and time.