Skip to main content
BIG SUMMER BLOWOUT: Over 2,000 deals ~ up to 85% off, through 8/16. Shop now >
The Enemies of Paul: Demons, Satan, Betrayers, and Apostles: Risk Analysis and Recovery of Paul's Opponents in Thessaloniki, Galatia, and Corinth in the Context of the First Century - eBook
By: Roger S. Busse
Stock No: WW111459EB 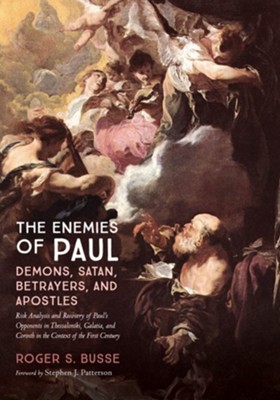 The Enemies of Paul: Demons, Satan, Betrayers, and Apostles: Risk Analysis and Recovery of Paul's Opponents in Thessaloniki, Galatia, and Corinth in the Context of the First Century - eBook

▼▲
Paul's conflict with viscous enemies, human and otherwise, led him to employ efficacious powers, charismata (charismatic powers), and controversial and sometimes illegal practices that are only coherent when placed in context of the first century Hellenistic-Roman world. These included soul and spirit transportation, possession, and exorcisms, special techniques to repel demonic attack, as well as what was considered the darkest of black magic in the ancient world--the casting of death curses, which called on Satan to infect, harm, and even kill his enemies. All of these can be recovered in striking detail using risk analysis of his undisputed writings and comparing them with contemporary sources, papyri, and documents independent of the New Testament. The results demonstrate that Paul's letters are so much more than simply intellectual and rhetorical correspondences--they are infused with dangerous mystical and charismatic powers feared in an ancient world that was saturated with prevalent, active dark forces and multi-layered human and supernatural conflicts; of angels and demons at war; of charismata and anathemata (deadly curses); and Paul's expectation of the hemera kuriou, "Day of the Lord," that would defeat Satan and the curse of death via pistis (faith) in the efficacious euangelion (gospel) of agape (love).

▼▲
Roger S. Busse is a recognized specialist in risk analysis, and a graduate of Reed College and Harvard Divinty School. His awarded career has spanned over forty years, from CEO of a nationally recognized institution to SVP of risk administration. Busse is a certified management consultant, adjunct professor, and author of two industry texts, The Essentials of Commercial Lending and Business Profiles, and two books on risk analysis and Christian origins, To be Near the Fire and Jesus, Resurrected.

▼▲
I'm the author/artist and I want to review The Enemies of Paul: Demons, Satan, Betrayers, and Apostles: Risk Analysis and Recovery of Paul's Opponents in Thessaloniki, Galatia, and Corinth in the Context of the First Century - eBook.
Back
Back