Skip to main content
SPRING CYBER EVENT STARTS NOW: And it's a really BIG deal! Up to 88% off through 5/24>
Betrayed Hearts
By: Susan Anne Mason
Stock No: WW163643 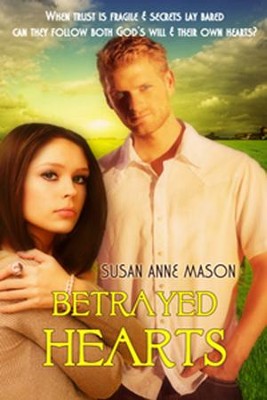 ▼▲
Lily Draper comes to Rainbow Falls in search of her biological sister, the only blood relative she has left. Emotionally scarred by her preacher father, Lily avoids religion at all cost. Her new landlord, an aspiring minister, soon has her questioning her views. Can she learn to trust Nick's heart or will her sordid past destroy their love? Nick Logan hopes to take over for the retiring minister who has groomed Nick for the job. But Reverend Ted seems to feel the position requires Nick to marry an upstanding woman, namely Ted's niece. When Nick finds himself falling in love with Lily Draper, the woman least likely to become a minister's wife, his problems escalate. And when Reverend Ted gives him an ultimatum, Nick faces an impossible choice. Can he accept God's will and still find a place for Lily in his life?

▼▲
After completing her first novel, Susan Anne Mason joined Romance Writers of America® and began to learn the craft of writing romance. Since then, she has completed several more novels and her love of writing has only increased. In 2010, she joined the American Christian Fiction Writers®, where she has found a home among an amazing group of writers. Susan writes contemporary and historical romance, and particularly enjoys exploring themes of forgiveness, redemption and healing. She lives near Toronto, Ontario with her husband of 28 years, their two children and two cats and works part-time as a church secretary. When she’s not working or writing, she enjoys researching her family history.

▼▲
I'm the author/artist and I want to review Betrayed Hearts.
Back