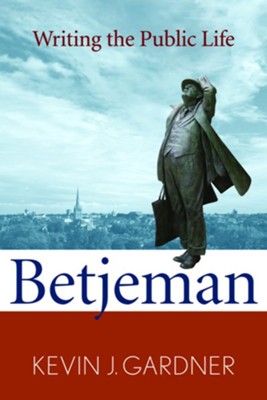 ▼▲
A public literary figure in Great Britain, John Betjeman openly declared his Christian faith and celebrated the cultural significance of the Church of England well beyond its religious role. In this masterful study of Betjeman's writings, Gardner demonstrates his collection of works to be a vital part of Anglicanism's living traditions. 250 pages, hardcover from Baylor University.

▼▲
A household name in Great Britain, John Betjeman was a public literary figure who openly declared his Christian faith and championed the social and aesthetic joys of Anglicanism as unique to English identity. Through poetry in newspapers and on radio and television broadcasts, Betjeman celebrated the cultural significance of the Church of England well beyond its religious role. Although a steadfast proponent for Christianity and the Church, Gardner explains, Betjeman nevertheless struggled mightily to believe the faith, and he was forthcoming with his own spiritual failures. In this master study of his writings, Gardner deems Betjeman to be the poet of the Church of England--and demonstrates his works to be a vital part of Anglicanism's living traditions.

▼▲
I'm the author/artist and I want to review Betjeman: Writing the Public Life.
Back