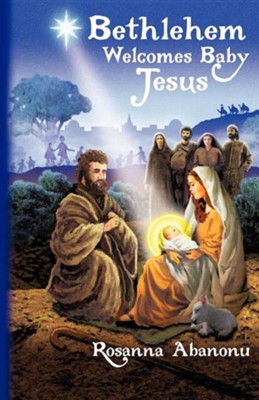 ▼▲
"Praise the God of Israel, it is a boy" they shouted. "Thanks be to the God of my father David" shouted Joseph Clapping his hands together near his chest he turned east facing Jerusalem. He then raised his hands up to Heaven, bowed his head and continued praising God. They all held their breath listened; the noise became louder and louder as the people drew nearer and nearer. They soon realized that what they were hearing was not noise but songs The people were singing This is the Lord's doing, it is marvelous in our eyesThis is the Lord's doing, we will praise him.All that transpired in Bethlehem with the Holy Family is not written in detail. We are not told of all that had happened at the manger after the shepherds' visit. We are only told that they went away rejoicing and told the story to other people. This story is more of a mixture of fiction and non-fiction that I made up based on what is in the bible. I hope that you enjoy reading this story just as much as I enjoyed writing it.Rosanna Abanonu is a retired school teacher who taught for over twenty five years before going back to school for her Masters Degree in Special Education. She was born in a Christian family and was brought up by her Uncle and Aunt. As a child she loved to hear the stories of important personalities in the Bible and when she became and adult she realized that those stories were written in a nut shell, very much condensed. The more she contemplated on the birth of Christ the more she inspired to elaborate more on the story.

▼▲
I'm the author/artist and I want to review Bethlehem Welcomes Baby Jesus.
Back
×