Skip to main content
Take Your Best Shot: Do Something Bigger Than Yourself
By: Austin Gutwein, Todd Hillard
Stock No: WW315154 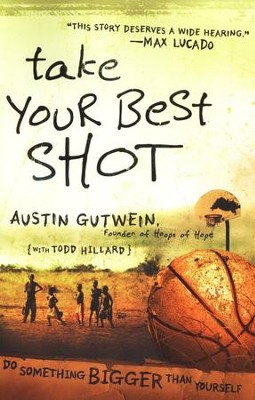 Take Your Best Shot: Do Something Bigger Than Yourself

▼▲
When teenager Gutwein learned there were over 15 million AIDS orphans in Africa, he organized a free-throw marathon to raise funds. Now his Hoops for Hope has built a school and medical clinic in Zambia! Using an interactive format, he challenges his peers to respond to God's call to minister to people, animals, and the environment. 240 pages, softcover from Nelson.

Discover how you can respond to God's call in your own life, whether it's in your own town or on the other side of the world.

Teen Austin Gutwein has taken his best shot several thousand timesto help AIDS orphans in Africa and in the process has built a schooland a medical clinic!  Take Your Best Shot tells how one boymade an incredible difference in the lives of those without hope whilechallenging the reader to do the same.

The interactive dialogue willleave space for the reader to respond. By the end of the book, thereader will know the testimony of Austin and other teens from aroundthe world who are committed to a life of sharing Christ’s love, andwill have begun to search for God’s voice in their own lives. The bookwill also equip and challenge readers with information on a variety ofministries and organizations around the world to help people, animals,and the environment.

“Austin is an outstandingyoung man! He inspires us to dream bigger, reach higher and love deeper. Hisstory deserves a wide hearing.” Max Lucado

“Ispent a day with Austin and his family and found them inspiring. His story, Ibelieve, challenges us all. The first thing I thought as I drove to the airportwas: What was I doing when I was twelve? Andthen, of course, the next thought: What,exactly, am I doing now?” John Larson, Former NBC NationalCorrespondent

“Whenpeople ask me how they can possibly make a difference fighting a problem as bigas ‘global poverty’, I tell them about a boy named Austin who, like David, stared Goliath in theeye without flinching. This young man has done more to make a difference in thelives of children orphaned by AIDS than most American churches, let aloneindividuals. If you are older than 10 and you haven’t yet done your part tochange the world, read TakeYour Best Shot and beinspired. Austin Gutwein shows us the way”. RichardStearns, President, World Vision US, Author of TheHole in Our Gospel

“Whenpeople ask who has most impacted me over the last year, without hesitation Ican say Austin Gutwein and the story of Hoops of Hope. I am around amazingleaders all the time, and Austin rivals all of them. Austinis my friend. And Austinis one of my heroes. You can’t be around Austinor the amazing work of Hoops of Hope without being deeply impacted andinspired. Trust me. Do yourself a favor and read this book and the incrediblestory. But once you do, be prepared to be changed and challenged. You’ll seethe world and your significant role in helping those less fortunate in anamazingly fresh way.” BradLomenick, Executive Director, Catalyst

“Austin’sstory is one of modern day heroism. He represents a new generation that cancarry us all into the twenty-first century: a world of hope, peace and selflesslove. Austincompletely inspires me.” DanielBiro, Hawk Nelson

▼▲
Todd Hillard is a free-lance writer from San Antonio, Texas. He lived in Turkey for two and a half years and has written more than 15 books. Todd regularly blogs at www.GetInTheSurge.com.

▼▲
I'm the author/artist and I want to review Take Your Best Shot: Do Something Bigger Than Yourself.
Back
Back