We are OPEN and SHIPPING - click here for shipping estimates
PRE-SUMMER CYBER SALE EXTENDED thru 6/1 ~ Over 2,500 items up to 90% off
Our Best Life Together: A Daily Devotional For Couples
By: Joel Osteen 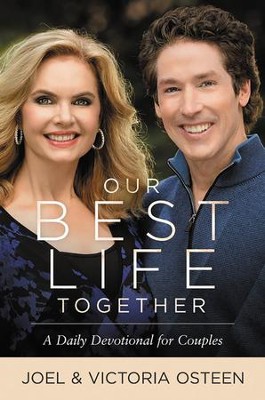 Our Best Life Together: A Daily Devotional For Couples

▼▲
For all married couples! The Osteens believe God has called you together as man and wife in order to help one another succeed and become all he created you to be. Learn to pursue that vision through daily devotional times that will put you on a path toward a positive, God-honoring, and faith-filled marriage! 304 pages, hardcover from Faithwords.

▼▲
Whether you've been married a few months or a few decades, this encouraging daily devotional will help you find quiet moments together to strengthen your faith in God and renew your love for and commitment to your spouse.
In Our Best Life Together, Joel and Victoria Osteen want to encourage you in your marriage and remind you that God brought you together to help each other succeed and to become all He created you to be. There's no better way to experience the fulfilling marriage God intends for you than to set aside a devotional time together each day and set your minds in the right direction for a positive, happy, faith-filled marriage. When you live together in unity, you honor God and open the door for His blessings to flow into every area of your life. If you will do your part, God will do His part, and you can live in love!

▼▲
JOEL OSTEEN is the author of ten New York Times bestsellers and the senior pastor of Lakewood Church in Houston. He has been named by numerous publications as one of the most influential Christian leaders in the world. His televised messages are seen by more than 10 million viewers each week in the United States and millions more in 100 nations around the world. More than 23 million people read and share his daily inspirational messages on social media, and he is the host of Joel Osteen Radio, a 24-hour channel on SiriusXM Satellite Radio channel 128. You can visit his website at www.joelosteen.com and find him on Facebook at www.facebook.com/JoelOsteen.
VICTORIA OSTEEN is the co-pastor of Lakewood Church and author of the New York Times bestseller, Love Your Life. She is also the host of a national weekly radio program, Victoria Osteen Live, on Sirius XM's Joel Osteen Radio. She provides daily inspirational messages to more than eight million friends and followers on social media and through her weekly blog posts, and is an integral part of all of the "Night of Hope" events across the U.S. and abroad.

▼▲
I'm the author/artist and I want to review Our Best Life Together: A Daily Devotional For Couples.
Back
×