The Best of Tom Fettke for Women's Voices, Volume 1 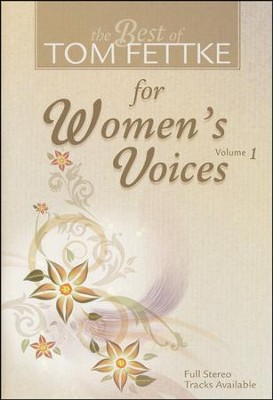 The Best of Tom Fettke for Women's Voices, Volume 1

▼▲
Arranged for ladies' voice by Tom Fettke, this songbook includes a blend of artist's songs, choral classics, and southern gospel favorites including "Be Still and Know," "Midnight Cry," "Rose of Bethlehem," and more.

▼▲
Tom Fettke holds degrees from Oakland City College and California State University at Hayward. He has taught music in both public and Christian schools and has served as a church choir director and minister of music in churches large and small for over 30 years. He is in considerable demand as a guest conductor, clinician, and worship leader. Tom is also a composer, arranger, and producer of music and recordings for the contemporary Christian church and has been associated with Lillenas Publishing Company since 1973. He and his wife, Jan, have two married sons and seven grandchildren.

▼▲
I'm the author/artist and I want to review The Best of Tom Fettke for Women's Voices, Volume 1.
Back
×
Back
×