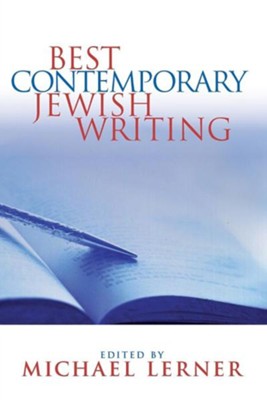 ▼▲
Jewish culture, identity, and spirituality through the eyes of the brightest and best authors
Best Contemporary Jewish Writing is a treasure trove of short stories, poetry, and essays from such renowned contributors as Naomi Wolf, U.S. Senator Joseph Lieberman, William Safire, and Marge Piercy. Dive into this rich arrayof writing and you ll see that the Jewish experience reflects universal themes.
The writers in this collection have something to say to Jews, not only to those struggling with their Jewish identity, and also to the wider world. Whether your main interest is in poetry or politics, spirituality or cultural identity, social healing or individual transformation, you ll find Best Contemporary Jewish Writing to be a collection that inspires, excites, and provokes. It also reflects the diversity of thought, opinion, and sensibility of today s best known Jewish thinkers and writers.
This volume is the first in the much anticipated annual series "Best Jewish Writing."

▼▲
Michael Lerner is the editor of TIKKUN magazine and rabbi of the neo-Hasidic Beyt Tikkun Jewish Renewal synagogue in San Francisco. His most recent book, Spirit Matters: Global Healing and the Wisdom of the Soul, was selected as "one of the most significant books of 2000" by the Los Angeles Times Book Review and won a PEN award. His previous writings include Jews and Blacks: Let the Healing Begin, a dialogue with Cornel West, and Jewish Renewal: A Path to Healing and Transformation (described by Conservative Judaism journal as "stunning, miraculous and faith-renewing"). Rabbi Lerner, designated by Utne Reader as one of America's 100 Most Important Visionaries, has been featured in the New York Times, USA Today, Los Angeles Times, Washington Post, U.S. News and World Report, and Newsweek. He holds Ph.D.s in philosophy and clinical psychology.

▼▲
In this collection of Jewish writing dating from 1994 to 2000, Lerner, the editor of Tikkun magazine, highlights his idea of the politics of meaning and the Jewish religious themes of healing and reconciliation. A wide range of authors (writing fiction, poetry, and essays) discusses questions of Jewish identity, religion, culture, the Holocaust, and Israel. Feminism, gay studies, and environmental concerns are important aspects of the selections. Many well-know authors are included, among them Adrienne Rich, Philip Roth, Yehuda Amichai, Aharon Appelfeld, and Norman Podhoretz. Zalman Schacter Shalomi presents an open and honest attempt to rethink Jewish religious thought, Marge Piercy and Jacqueline Osherow's poems bring new elements to Jewish thinking, and Morris Dickstein describes the changing themes and ideas of writers in the United States. The result is an interesting and diverse anthology. Recommended for Jewish studies collections. (Gene Shaw, NYPL, Library Journal, August 2001)

Whenever my old friend, the curmudgeonly book lover, came across an anthology with a title like "Best Plays" or "Best-Loved Poems," he'd always mutter, "Best? Best? Who says so?" Who, indeed? Why, editors of anthologies claiming "bestness," of course. The editor of "Best Contemporary Jewish Writing" is Rabbi Michael Lerner, editor of Tikkun magazine and himself included in Utne Reader's list of America's "100 Most Important Visionaries."
Continuing his quest for the best, Lerner concludes his collection with a list of "The One Hundred Best Contemporary Jewish Books." So many judgment calls about what's best may well stimulate debate. Still, why quibble? As Lerner explains, this is simply his opinion of what is most significant.
Lerner is a man with a mission, and the mission concerns Jewish spiritual renewal. If large numbers of American Jews in the early and middle decades of the 20th century were breaking loose from their traditional moorings, the last few decades have witnessed, if not quite a return to origins, then certainly a renewed interest among Jews in their religious and cultural heritage. And, indeed, the sheer diversity of voices in this collection, the passion, intelligence and sense of commitment that can be heard are ample evidence of this renewal.
Many kinds of writing have been included: memoirs, essays, literary criticism, fiction and poetry. Sen. Joseph Lieberman describes the origins of his commitment to public life. Moroccan-born Ruth Knafo Setton reflects on her personal experiences as a "Sephardic Jewess" (from the title of her piece). In "Gay and Orthodox," Rabbi Steve Greenberg discusses the dilemmas he has faced trying to reconcile his sexuality with scriptural injunctions against lying with men. Questions of Jewish identity, such as finding the right path between assimilation and distinctness, are addressed in a variety of forms, including an engaging poem by Kenneth Koch and a thoughtful essay by David Biale.
Several pieces by feminists, such as theologian Rachel Adler and novelist Anita Diamant, offer provocative and illuminating interpretations of biblical stories (although Susan Schnur's diatribe against sexism in the Book of Esther is simply obtuse).
On the current literary front, Morris Dickstein surveys contemporary Jewish writers, while Norman Podhoretz has some incisive things to say about Philip Roth and Saul Bellow.
Perhaps the most fascinating material in this book deals with human responsibility toward the natural world. "My commitment to the life of the planet is stronger than my commitment to any philosophy or creed," declares Zalman Schachter-Shalomi, founder of the Jewish Renewal Movement. "If you have felt commanded by the Divine Imperative to protect Earth from planetary destruction, then you have undergone the first stage of a Gaean initiation." Citing Evan Eisenberg's book "The Ecology of Eden" (one of the 100 best on Lerner's list), Arthur Waskow offers an account of the Hebrew religion as a response of humble, freedom-loving Western Semites--shepherds, hunter-gatherers and hill farmers--to the far more regimented, hierarchical world of the Babylonian empire, where a revolution in agricultural technology had created wealth, order and stability, but at the cost of a drastic change in man's relationship to the Earth, to women and to his fellow man.
Two later sections, "Living in the Shadows of the Holocaust" and "Israel in Conflict," are marked by a certain tendentiousness. Although Lerner makes some concession to representing those pushing for the peace process and those who consider it sadly unrealistic, the overall thrust is to lend plausibility to the doves. A triad of essays discussing the Holocaust--by Jonathan Rosen, Zymunt Bauman and Tikkun's associate editor Peter Gabel--makes some interesting points about everything from the film "Schindler's List" to the Nazi mentality. Read in sequence, they function as a kind of three-pronged critique of Jews who (as they see it) use the Holocaust as an "excuse" to justify Israeli hard-line policies.
Jews concerned for their safety and survival having thus been discredited as victims of mass hysteria, the stage is set for Israeli revisionist historian Benny Morris' critique of previous Israeli historians for their tendency to minimize Israel's role in getting Palestinian Arabs to flee their homes during the Israeli War of Independence. Then, for anyone still concerned about the dangers of anti-Semitism--anyone who's been following the venomous goings-on at the soi-disant "anti-racism" (viz. anti-Zionism) U.N. conference in Durban--Jerome Slater notes (rightly, but perhaps no longer all that relevantly) that Palestinian Arabs were not innately anti-Jewish and only became that way after their land was occupied by Israel. (To this, one might say: Nor were Germans overwhelmingly anti-Semitic until they were humiliated at Versailles! To recognize a "root cause" does not necessarily, by itself, enable one to undo the effects.) A grimmer and (sadly, one fears) more realistic view is provided in Daniel Pipes' essay "Land for What?"
Still, there is an optimism, excitement and animation about Lerner's collection that is hard to resist. This volume is the first in a series that is planned to come out each year. It is clearly an auspicious beginning. (By Merle Rubin, LA Times, September 17, 2001)

▼▲
I'm the author/artist and I want to review Best Contemporary Jewish Writing.
Back