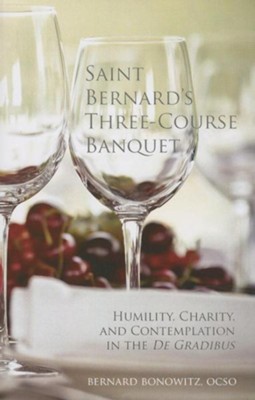 ▼▲
Saint Bernard’s famous work, The Steps of Humility and Pride (in Latin, De gradibus humilitatis et superbiae), is a short book consisting of a mere fifty-seven paragraphs. In it, the Abbot of Clairvaux unpacks the doctrine of the very crucial chapter 7 of Saint Benedict’s sixth-century Rule for Monks, which explores the dynamic “steps” or “degrees” of both humility and pride. This chapter by Benedict could well be considered the spiritual basis of all Benedictine existence. In Saint Bernard’s Three-Course Banquet, Dom Bernard Bonowitz makes the teaching of both Bernard and Benedict accessible to modern readers in a set of conferences originally conceived for and delivered to a group of Cistercian “juniors,” that is, monks and nuns who had completed their novitiate but had not yet made their solemn vows. With Dom Bernard as a guide, many more readers can be sure of drinking at the purest sources of the monastic tradition, which at that depth becomes one with the Gospel itself. A convert from Judaism with a degree in Classics from Columbia University, Bernard Bonowitz was a Jesuit for nine years before entering St. Joseph’s Abbey in Spencer, Massachusetts. Immediately upon professing vows, his abbot named him master of novices, a position he held for ten years and that gave him ample opportunity to share considerable gifts of mind and heart while initiating newcomers into monastic life, at the levels of both classroom teaching and spiritual direction. In 1996 he was elected superior of the monastery of Novo Mundo in Brazil, which he soon shepherded into a true monastic springtime. In 2008, he became abbot of Novo Mundo, now a community attracting an impressive number of young men anxious to follow the way of Cistercian discipleship.

▼▲
I'm the author/artist and I want to review Saint Bernard's Three-Course Banquet: Humility, Charity, and Contemplation in the De Gradibus.
Back