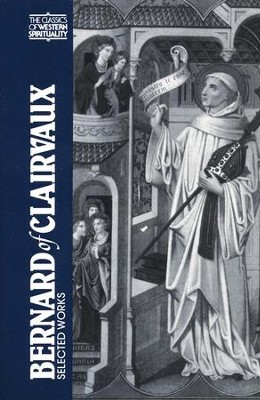 ▼▲
Born in Fontaines les Dijon in 1090, Bernard had become, by his twenty-fifth birthday, the abbot of Cistercian monastery which he had founded in the valley of Clairvaux near Aube, France some four years earlier. There in those isolated and rugged surroundings he became the spokesman for a revival of moastic life in an age when the radical spirit of religious life was endangered by a movement, best seen in the excesses of the monks of Cluny, that stressed the adaptation of the rule of St. Benedict to the exigencies--and taste for princely comforts--of the royal courts of twelfth century France. But Bernard's dedication to the strict observance of Benedict's rule was mingled not with the abrasive, shrill style of the prophet but with sweetness and purity of vision that earned him the title Doctor mellifluus. For he possessed a sense of the love of God, the importance of humility, and the sheer beauty of holiness that has made his writing favorites of scholars and laymen alike throughout the ages.
Here in a new translation by R. R. Evans are the writings that have had such a major role in shaping the Western monastic tradition and influencing the development of Catholic mystical theology. Together with an introudction by the master of Bernard studies, Jean Leclercq, they comprise a volume that occupies a place of special importance in the chronicle of the history of the Western spiritual adventure.

▼▲
Here are writings of the great medieval spiritual teacher (1090-1153) who was preacher of the Crusades and founder of the Cistercians, with an introduction on the forming of Bernard's spirituality, its character and influence.

▼▲
I'm the author/artist and I want to review Bernard of Clairvaux: Selected Works (Classics of Western Spirituality).
Back
Back