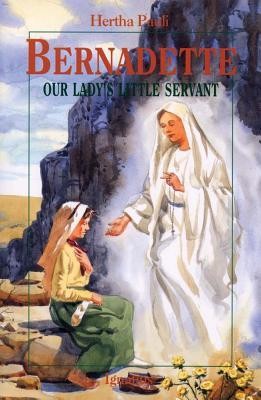 ▼▲
This is the story of the girl to whom the Blessed Virgin appeared as "a little young lady" and revealed herself as the Immaculate Conception. Bernadette Soubirous lived with her family in the abandoned jail of the little French village of Lourdes, never dreaming that the very name of Lourdes would one day bring inspiration and hope to millions. Bernadette studied her Catechism, took care of her brothers and sisters, and gathered firewood -- and no one knew she was a Saint. But one day, as she was gathering wood, Our lady appeared. Within a few weeks, thousands were kneeling in the field to pray to the Lady who could be seen and heard only by Bernadette. This was the beginning of one of the greatest Marian Shrines of modern times and of the miracles with which Our Lady blessed her children.

▼▲
I'm the author/artist and I want to review Bernadette: Our Lady's Little Servant.
Back