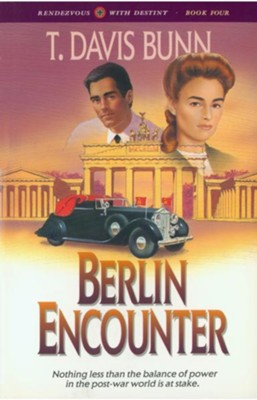 ▼▲
Experience the beginning of the Cold War--Book 4 in RENDEZVOUS WITH DESTINY!

In the RENDEZVOUS WITH DESTINY series, T. Davis Bunn has captured the drama and reality of post-World War II Europe and North America. Readers have come to know the men, women, and children who struggled to survive amid the incredible devastation and chaos left in the war's aftermath. In Berlin Encounter, Bunn takes his readers face to face with the Community tyranny and the potential for mass destruction in Europe.

Colonel Jake Burnes had never imagined himself a spy, but the acclaim he garnered for rescuing a French resistance hero and bringing a traitor to justice led to a more clandestine assignment. Now he must venture into the sector of Germany held by the Red Army and secure the safe passage of two rocket scientists to the West. NATO intelligence assures him that nothing less than the balance of power in the post-war world is at stake. But Jake is unaware that Russian spies have infiltrated this elite group, jeopardizing his mission and life.

Still in the pleasure of being a newlywed, his wife Sally learns of the danger and rushes to warn Jake. But just as they are about to flee from Berlin with the scientists, Stalin's stranglehold around the city tightens even further. Now they must escape the notorious Berlin Blockade, or face certain death on charges of espionage!

Another compelling read in the RENDEZVOUS WITH DESTINY.

▼▲
Davis Bunn (www.davisbunn.com) is the award-winning author of numerous national bestsellers with sales totaling more than seven million copies worldwide. His work has been published in twenty languages, and his critical acclaim includes four Christy Awards for excellence in fiction. Bunn is a Writer-in-Residence at Regent's Park College, Oxford University. He and his wife, Isabella, divide their time between England and Florida.

▼▲
I'm the author/artist and I want to review Berlin Encounter - eBook.
Back
Back