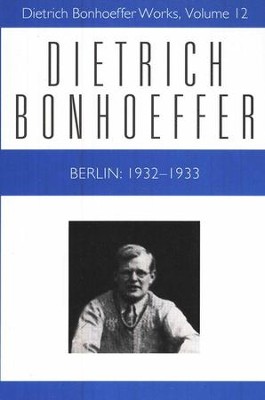 ▼▲
* At a turning point for Germany in 1933, the Nazis rose to power in just 100 days. Tracing his growing anxiety about a society "that was moving toward political, social, and economic chaos," this collection of Bonhoeffer's letters, sermons, and manifestos---many translated for the first time---offers his reflections on events occurring between 1932 and 1933. 650 pages, hardcover from Fortress.

"Then came the crisis of 1933." This is Bonhoeffer's own phrase in a letter that documents a turning point in his own life as well as that of the nation. Of Bonhoeffer's own life at this time, his biographer writes, "The period of learning and roaming" from 1928 until 1931 "had come to an end" as the young lecturer, age 26, began to teach "on a faculty whose theology he did not share" and to preach "in a church whose self-confidence he regarded as unfounded." Bonhoeffer was becoming part of a society "that was moving toward political, social, and economic chaos."

Events moved quickly at the onset of 1933 in Berlin. In only one hundred days the path was cleared by the German Parliament and the Nazi Party for the establishment of the fascist dictatorship. These one hundred days, as well as the preceding and succeeding months, are reflected in the materials in this volume: in letters, in sermons, in Bonhoeffer's university teaching, in manifestos and a church confession, and in his proactive engagement in the developing church struggle. The vast majority of these are translated here for the first time.

Larry L. Rasmussen, a renowned Christian environmental ethicist, is Reinhold Niebuhr Professor of Social Ethics, emeritus, at Union Theological Seminary. He is the author of Earth Community, Earth Ethics; winner of the Grawemeyer Award; and a recipient of the Lifetime Achievement Award from the Society of Christian Ethics. He has mentored a generation of scholars in eco-theology and green religion, rooted in practices of environmental justice within community contexts. He lives in Santa Fe, New Mexico.