Skip to main content
BIG SUMMER BLOWOUT: Over 2,000 deals ~ up to 85% off, through 8/16. Shop now >
Berkeley Street Theatre: How Improvisation and Street Theater Emerged as a Christian Outreach to the Culture of the Time - eBook
Edited By: Jeanne C. DeFazio
Stock No: WW108759EB 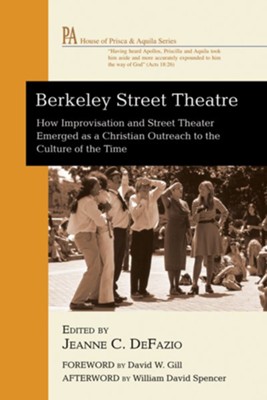 Berkeley Street Theatre: How Improvisation and Street Theater Emerged as a Christian Outreach to the Culture of the Time - eBook

▼▲
Berkeley Street Theatre chronicles Christian World Liberation Front's 1969-1975 ministry to the counterculture. Founded by Jack Sparks, CWLF was featured in the June 1971 Time Magazine's epic "Jesus Revolution" edition. Reverend Billy Graham sponsored the CWLF outreach and referred to CWLF as a highly effective outreach to the counterculture. The book included a foreword by David W. Gill, former CWLF leader, scholar, and author, contributing chapters from BST's members: Gene Burkett, Charlie Lehman, Susan Dockery Andrews, Father James Bernstein, and Jeanne DeFazio, editor of the book. Part Two of this work outlines Christian Guerilla theater following the timeline of BST with contributing chapters from: JMD Myers, Joanne Petronella, Jozy Pollock, Olga Soler, and Sheri Pedigo. William David Spencer's afterword details the cultural contributions of the Jesus movement. This book will appeal to the baby boom generation as well as millennials. It is a resource work for anyone interested in religious history, Christian theater and the arts, and in how baby boomers embraced the Jesus Movement. The photos of BST's Sproul Plaza performances will charm all readers.

▼▲
Jeanne C. DeFazio holds an MA in Religion from Gordon Conwell Theological Seminary. She is currently an Athanasian Teaching Scholar at Gordon Conwell Center for Urban Ministerial Education in Boston and a co-editor with William David Spencer of Redeeming the Screens (2016), a co-author with Teresa Flowers of How to Have An Attitude of Gratitude on The Night Shift (2014), and a co-editor with John P. Lathrop of Creative Ways to Build Christian Community (2013).

▼▲
I'm the author/artist and I want to review Berkeley Street Theatre: How Improvisation and Street Theater Emerged as a Christian Outreach to the Culture of the Time - eBook.
Back
Back