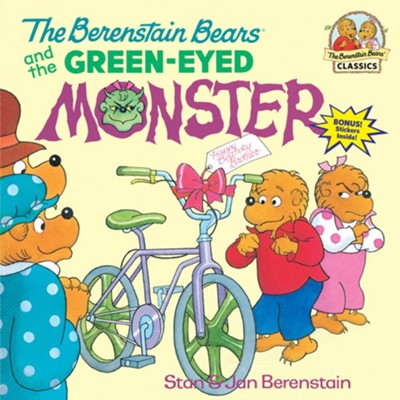 The Berenstain Bears and the Green-Eyed Monster

▼▲
This classic Berenstain Bears story is a perfect way to teach children about jealousy and how to overcome it!

Come for a visit in Bear Country with this classic First Time Book® from Stan and Jan Berenstain. Brother just got a new bike for his birthday, and now Sister is green with envy. Will she ever be able to get passed it? Includes over 50 bonus stickers!

▼▲
Stan and Jan Berenstain were both born in 1923 in Philadelphia.  They didn't know each other as children, but met later at school, at the Philadelphia College of Art.  They liked each other right away, and found out that the both enjoyed the same kinds of books, plays, music and art.  During World War II, Stan was a medical assistant in the Army, and Jan worked in an airplane factory.  When the war was over, they got married and began to work together as artists and writers, primarily drawing cartoons for popular magazines.  After having their two sons Leo and Michael, the Berenstains decided to write some funny children's books that their children and other children could read and enjoy.  Their first published children's book was called The Big Honey Hunt .  It was about a family of bears, who later became known as the "Berenstain Bears".

Over 50 children's books later, Stan and Jan still plan all of their books together -- both write the stories, and both write the pictures.  They live outside of Philadelphia in the country.

▼▲
I'm the author/artist and I want to review The Berenstain Bears and the Green-Eyed Monster.
Back